At the beginning of the 1930’s, night air mail services started to become more and more important for European Airlines. Navigation and safety equipment improved drastically and aircraft became much more economical to fly. The introduction of the fast Lockheed Orion by Swissair in April 1932 led to a true revolution within air transport. “Everyone wanted aircraft that flew faster than their existing obsolete Fokker- or Junkers aircraft.

In Sweden, AB Aerotransport’s Managing Director, Carl Florman, became interested in faster airliners as well. In May 1933, Bernt Balchen introduced them to the Northrop Gamma and was interested in a similar Aircraft for his airline. Offers were requested through Northrop representative, Norwegian aviator Bernt Balchen, AB Aerotransport ordered in October 1933, a passenger Delta 1C and in January 1934, a mail aircraft, the Delta 1E.

The operation of both aircraft was marked by problems and challenges for the pilots. It took them some time to master the aircraft. The Delta 1E never entered service, as it crashed on a trial mail flight. In 1937, ABA sold the Delta 1C to Spanish airline Lineas Aereas Postales Espaňolas – LAPE. It remained in civil and military service until well after World War II.

After intensive research, the author (Rob J. M. Mulder) describes in detail the history and operation of these two aircraft. But Bernt Balchen’s role in the story and the visit of a Northrop Gamma to Norway is described. Also, we learn about the history and development Northrop Alpha, Beta and Gamma, as well as the other Deltas. In addition, the militairy types and their use in Norway and Sweden and other countries is described. The book is illustrated with many photographs, tables, colour profiles by Juanita Franzi, Nils Mathisrud and Torstein Landström Wallmo. Mats Averkvist supplied drawings and was a great support for the author. 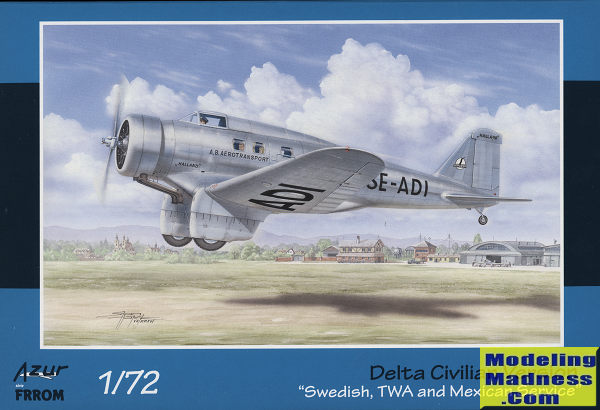