In 1923 the Internationella Luftfartsutställningen i Göteborg (ILUG), the International Aero Exhibition in Gothenburg, was a great success. It was the first big international event after the ELTA – The First Aviation Exhibition Amsterdam, held in 1919. One of the events was the skywriting (1) of Mr. Bramson in the sky above the Swedish harbor city. After the visit to Gothenburg, he travelled to Copenhagen, Malmö and Christiania (since 1925 known as Oslo) for more demonstrations of skywriting. Here is the story of his visit to Christiania.

Read more about the ELTA

-“Is it Mr. Bramson?”
– “Jaha, det är det!”, meaning “yes it is” in Swedish. The reporter of the Norwegian newspaper Aftenposten was surprised that the pilot Mogens Louise Bramson from Britain could speak Swedish. It turned out that the Danish-born Mr. Bramson spoke Swedish, Norwegian and Danish! He was born in Copenhagen in 1895 as son of Dr. Louis Bramson (1861-1952) and famous Danish author Karen Bramson (1875-1936). He had received his training in Britain and had flown there for some time before he took a position at Major Salvage. He obtained his Aviators’ Certificate on June 12, 1923 with the number #7943. (2) Soon he became the leader of the “Scandinavian Sky-Writing Expedition” in 1923-24!

He had been one of the first to arrive at the ILUG and had made several flights above Gothenburg. He flew a small biplane of the type RAF S.E.5a with the British registration G-EBDU and named “The Sweep”.  The aircraft was registered on June 28, 1922 and was scrapped in June 1924. In May 1923 he had been employed by the inventor of skywriting, Major J. C. Savage, as Continental Manager of Savage Sky Writing Company Ltd. By 1923, the company had eight pilots and twenty biplanes of the type RAF S.E.5a in service. His aircraft was powered by a 200hp engine and had a maximum speed of 200 kph. Seven of these aircraft were stationed in the USA. The company performed sky writing in the United Kingdom, the USA, France, Belgium, Denmark and Sweden. It got more and more popular and since Major Salvage was in the possession of the patent only the sky seemed to be the limit!

So, how does it work?
The pilot would climb to 3-4,000 meters and “write” the letters in a horizontal and mirrored position. A special exhaust pipe was mounted alongside the fuselage and smoke was pressed through this pipe to the rear of the aircraft. In order to be able to write a letter he needed 20,000 cubic meter of a special, secret and patented substance. In order to understand the size of a letter: a six-letter word could easily have a length of six kilometers. Sky writing was visible on an area of 80-100 square kilometers! In the USA Major Salvage’s company had performed no less than 1,500 flights for a tobacco firm (Lucky Strike). During the three months in service Mr. Bramson had already performed 100 flights. After the ILUG, Mr. Bramson would travel to the capital of Denmark and Norway. In Norway the company had made an agreement with the newspaper “Aftenposten” (The Evening News) and the tobacco firm “Tiedemand”.

Arrival to Christiania
The original plan was to arrive at the Kjeller air field, just north of Christiania on Saturday, August 11, 1923. Unfortunately he had to postpone the departure due to weather conditions in Copenhagen. And when he wanted to take-off on following Sunday, his engine problems and had to replace a part. He hoped to depart as soon as these repairs were done. In the end the people of Christiania had to wait until Friday, August 24, before Mr. Bramson could take off from Gothenburg. He had been told to go for the first green spot in the north – that would be Kjeller air field. The flight from Gothenburg to Christiania and Kjeller went without any problems. On his arrival a journalist from Aftenposten greeted upon him and the Norwegian Army Captain Vetlesen, in charge of Kjeller air field, had space for his small RAF S.E.5a in one of the hangars. For Mr. Bramson the most important question was: “How is the weather forecast for tomorrow?” He wanted to start as soon as possible with his sky writing. On neither Saturday and Sunday it was possible for Mr. Bramson to take-off and show his skills. It was expected that if he wrote letters in the sky right above the Oslo harbor his writing would be visible in a 5 kilometer circle, covering areas like Nordstrand, Bryn, Grorud, Stabekk and further north of Holmenkollen. A funny remark one journalist wrote was: “The sky writing does not do any harm to its audience!” 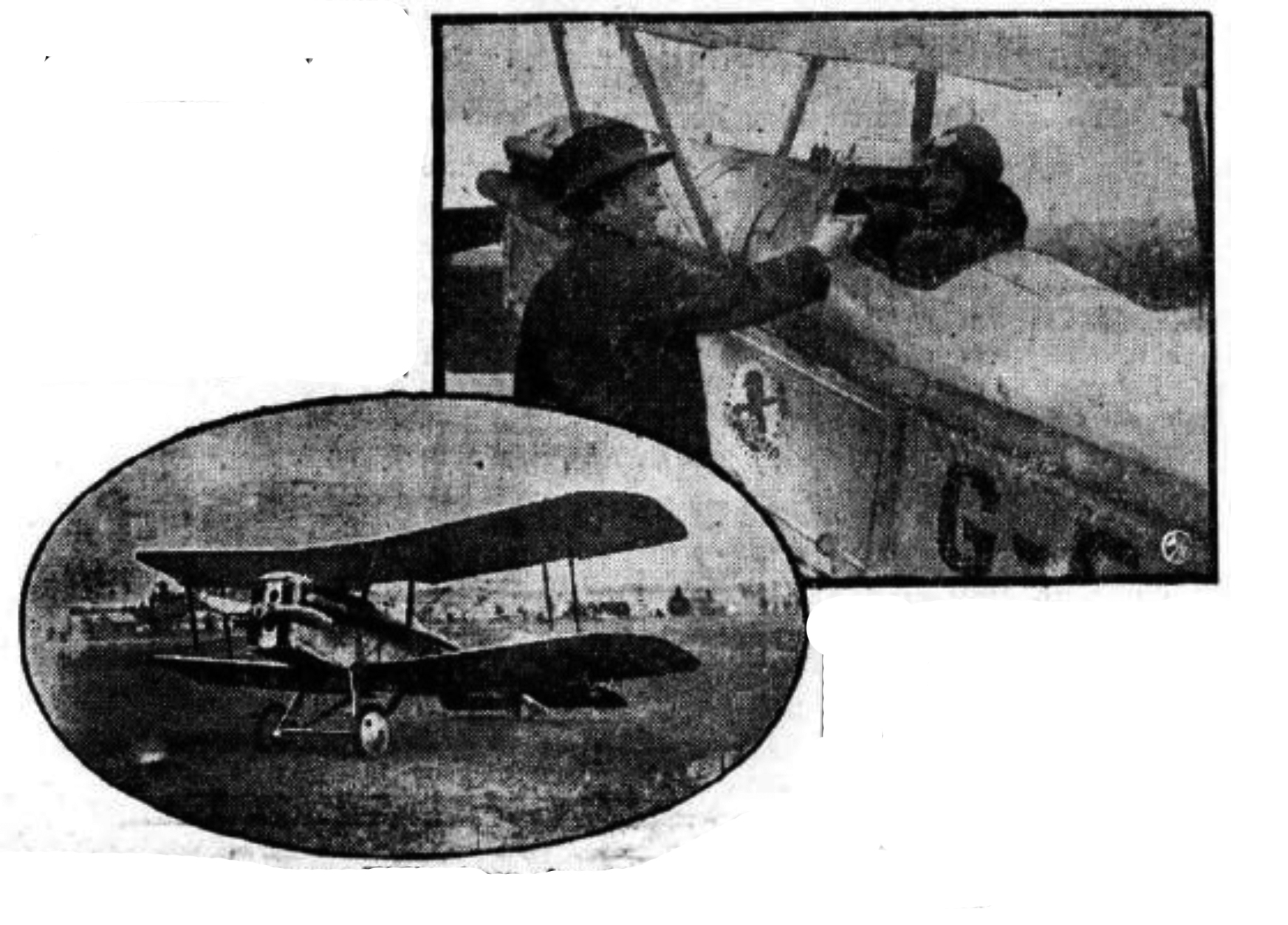 Finally sky writing
The start of Monday, August 27, was weather wise not too well. But during the day the weather improved and at 14.00 hrs. Mr. Bramson could start to prepare his aircraft. At 14.30 hrs. he took off and set his course for Christiania. There were still clouds and high winds, but at the altitude he was going to fly the winds were not too strong. He would fly to the center of Oslo and write first the word “Aftenposten”. This word was to have a length of 10 kilometers! He climbed out of Kjeller and arrived high (3,100 meters) above the center of Christiania. The population was stretching their necks to get a glimpse of the aircraft, but all they could see was a small dot in the sky, which looked more like a bee than an aircraft. But he had reached its height and started his sky writing in front of a huge crowd standing on the Karl Johans Gate, in parks and on ships on the fjords.

People shouted “Look he is writing the A” and soon followed by the “f”, the “t”, the “e”, the “n”, the “p” and the “o”. But then a cloud disturbed him and he had to end the word, fly past the cloud and on the other side he could continues with the “s”, another “t” and finally the letters “e” and “n”. Suddenly the word “Aftenposten” appeared in the sky. Right after finishing the word, he returned to Kjeller, where he landed his small biplane on the green grass of the air field. He had written a word that was ten kilometer long and he had flown 25-30 kilometer at a speed of 180 kph in order to be able to write the word!

The aircraft would fly from right to left and write mirrored.

Flying for Tiedemand
On the following Wednesday afternoon Mr. Bramson made some advertising flights for the tobacco firm Tiedemand and wrote above Christiania the words “Røk Teddy – Kef” (smoke Teddy – Kef), while he continued outside town and wrote the words “Garter Tiger”. After that, Mr. Bramson had fulfilled his contracts and was ready with sky writing in Christiania.

People who had made a photograph of one of the word could send it in to the newspaper Aftenposten and they could participate in a draw. The best photograph would be awarded with 100 Norwegian kroner. The winner was Mr. Ole Bjerke, Nordahl Bruns Gate 12, who took a picture from the street Karl Johans Gate with the statue of Henrik Wergeland in front. In the sky the word “Kef” was visible.

The next day Mr. Bramson thanked Captain Vetlesen for his hospitality and took off from Kjeller air field bound for Stockholm, where new assignments waited for him. But Christiania had had its sky writing adventure. Has it ever been done again?

Notes:
(1)    Skywriting is the process of using a small aircraft, able to expel special smoke during flight, to fly in certain patterns to create writing readable by someone on the ground. The message can be a frivolous or generally meaningless greeting or phrase, an advertisement aimed at everyone in the vicinity, a general public display of celebration or goodwill, or a personal message such as a marriage proposal or birthday wish. Source: http://en.wikipedia.org/wiki/Skywriting