The start of the company

In the spring of 1921 the Franco-Romanian airline company Compagnie Franco-Roumaine de Navigation Aérienne – CFRNA opened the air service Wien – Praha – Warszawa operated in connection with the service to and from Strasbourg and Paris. The route to Poland was also opened to secure the French influence in the new eastern European countries. But the initiatives after the liquidation of the Polish airline company Aero Targ Spólka Akcyjna were kept alive in Poznań and in February 1925 the Towarzystwo Komunikacji Lotniczej Aero Spólka Akcyjna (Company of the Communication of Air Service ‘’Aero’’ Ltd.), also known as S A Aero, was initially formed with a stock capital of Zł 20,000. The stock capital was on March 31, 1925 increased to Zł 300,000. The shares were each worth Zł 50.

The shareholders approved the articles of association on February 16, followed by the registration of the company on February 27. Founders of the company were Adolf Bninski, B Dobrzycki (ex director of the Aero Targ Spólka Akcyjna), General K Kazimierz Raszewski and the Vice Major of Poznán Mikołaj Kiedacz. The management of the company consisted out of Witold Labinski and military pilot Captain Anton Wroniecki. Among the shareholders were the Polish Poznań-born Interior Minister Cyryl Ratajski and General Raszewski. Józef Jakubowski was appointed Chief pilot of SA Aero and the first three pilots of SA Aero were Jozef Wazniak and M Witkowski. The latter soon returned where he came from: to P.L.L. Aerolot. In 1926 another two were assigned: Ludwig Strzelczyk and Antoni Slawiec. The company received a concession for the following services: Poznań – Warszawa, Poznań – Zbąszyń, Poznań – Łódż – Warszawa Poznań – Katowice – Kraków and Poznań – Bydgoszcz – Gdánsk.

The first two aircraft were taken over from the Franco-Romanian airline company Compagnie International De Navigation Aérienne – CIDNA (since 1925 the successor of the CFRNA) and flown by French pilots Landry and Salmon from Paris/Le Bourget via Zürich, Innsbruck, Wien and Kraków to Poznań. Here it arrived on May 3, 1925 and was after an overhaul delivered officially on May 19, 1925. They were of the type Farman F 70 (ex F-AGGG and F-AGGH) and received the Polish registration P-P.O.Z.A. and P-P.O.Z.B. They were immediately used for joy ride flights out of Poznań. The single engined biplane carried four passengers in and enclosed cabin and face to face. It had made its maiden flight as early as in April 1920. The first customers of the aircraft were Lignes Aériennes Farman, Aéropostale and the Compagnie Aérienne Française. The Polish version was powered by one 300 hp Renault 12Fe twelve cylinder water-cooled engine. Just four days after the delivery, the Farman F 70 was to open the air service Poznań – Warszawa. Departure from Poznań was set at 8.30 am with arrival in the capital after two flying hours. The aircraft departed from Warszawa at 5.00 pm with arrival at 7.00 pm. The opening of the first air service was surrounded by celebrations. Its inauguration had been schedule earlier but the delay in the delivery of the aircraft forced SA Aero to start up later. Chief pilot Józef Jakubowski departed Poznań at 09.00 am for the first flight and among the his passengers were Interior Minister Ratajski, General Raszewski and the Farman representative Treillar. Upon arrival in Warszawa a small diner party was held in “Hotel Europejski”, where among the guests Interior Minister Ratajski and General Raszewski were joined by the managing director of P.L.L. Aerolloyd Dr I Wygard. Dr Wygard said in a letter to Dr Gottfried Kaumann (Junkers Luftverkehr AG – Jlag), that it was expected that SA Aero would have a longer life since influential persons ran and owned the company. It could also count on support from the government and the city of Poznań. All agreed that the Farman F 70 was not the most ideal aircraft for the service since it already weighed 2,000 kg and had two benches in the cabin. But for the time being this was regarded as best solution.

Beside the connection to Warszawa, the SA Aero would have liked to open an air service to the capital of Germany, Berlin, but the lack of an Air Treaty with this country, put a halt to this. This air service could not be opened until 1934, but then by the new national carrier PLL LOT, the successor of PLL Aerolot and SA Aero.

October saw the delivery of another three brand new Farman F 70 from France. They were allocated the registrations P-P.O.Z.C., P-P.O.Z.D. and P-P.O.Z.E. The letters “POZ” in the registration stood for the first three letters of the city of Poznań. On November 2, 1925 a re-routing of the Warszawa-service was carried through. From that day, the city of Lódz was added to this service.

In the first year of operation (1925) SA Aero made 278 flights, carrying 764 passengers, 13,790 kgs of freight and luggage and 285 kgs of mail. The company continued flying the service in the following years, subsidised by the polish Government. Between May and September 1926 SA Aero received just 8.9% of the totally awarded subsidies. The remainder went to P.L.L. Aerolot.

In 1928 two accidents had to be registered: On February 11, Józef Jakubowski and mechanic Ludwik Schultz had to make with the Farman F 70 P-P.O.Z.B. an extraordinary landing. The aircraft was taken by horse and carriage to the workshop of the company and returned to the company later that year. It had been withdrawn from use at the formation of PLL LOT.

The total destruction of the Farman F 70, P-P.O.Z.C. on November 16 had not been possible to avoid. The pilot Józef Wozniak and mechanic Bronisław Ratajczak had to make an emergency landing west of Warszawa (near Sochaczewem) where the aircraft was written off.

A third Farman F 70 (P-P.O.Z.E.) was also slightly damaged, but when is unknown and the aircraft was eventually rebuilt. None of the Farman F 70s were taken over at the formation of PLL LOT in December 1928.

The table below will give information with regard to the results of the airlines between 1926 and 1928.

Modernizing of the fleet 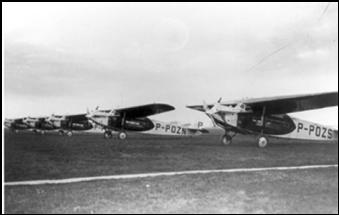 In April 1928 the managing director of the NV Nederlandsche Vliegtuigfabriek (Fokker-) factory Anthony Fokker concluded the negotiations about the licence rights in Poland for the Fokker F.VII. Thus the successor of the Farman F 70 was found in the Dutch single-engined Fokker F.VIIa. On May 10, 1928 a contract for the delivery of six brand new aircraft was signed and the first aircraft was flown over in October 1928 and registered P-POZM. It was not until November 27 that year before it was delivered to SA Aero. The Fokkers F.VIIa’s were allocated the registrations P-P.O.Z.M., P-P.O.Z.N. and P-P.O.Z.O. and were followed by another three in December: P-P.O.Z.P., P-P.O.Z.R. and P-P.O.Z.S. The aircraft was a single-engined (450 hp Lorrain 12Eb) was the first Fokker aircraft to have the wing built complete and the ailerons sawn out before covering. The prototype (c/n 4899, H-NACZ) flew for the first time on March 12, 1925 and eleven were delivered to Dutch airline company KLM. SA Aero took delivery of six aircraft, which were all taken over by PLL LOT upon its foundation. The first two Polish pilots had been on a training course in Holland in November and returned at the end of the month to start flying the F.VIIa.

On December 28, 1928 the reorganisation of the Polish aviation was concluded with the merger of the two airline companies PLL Aerolot and SA Aero into a state-owned airline company: the Polska Linia Lotnicza LOT. The Towarzystwo Komunikacji Lotniczej “Aero” ceased to exist after the formation of PLL LOT.