This website looks at the history of the European airlines from the humble beginnings following WW1 until 1945. It is run by Rob Mulder, who has written several books and numerous articles about civil aviation of this period. His proudest achievement in Norway was to receive the award “Aviation Enthusiast of the Year” (2013). Furthermore, two of his books have been awarded “Norwegian Aviation Book of the Year”.

On these pages we present a wide variety of articles about this subject illustrated with pictures and drawings. Under ARTICLES we present stories about different aspects of airlines and aviation events, detailed presentations of the fleet of European airline companies and a series of articles about a specific aircraft types in service with one of the European airlines.

You may also purchase books in the SHOP, among them our own publications.

Thank you for visiting my website.
EUROPEAN AIRLINES – Rob Mulder 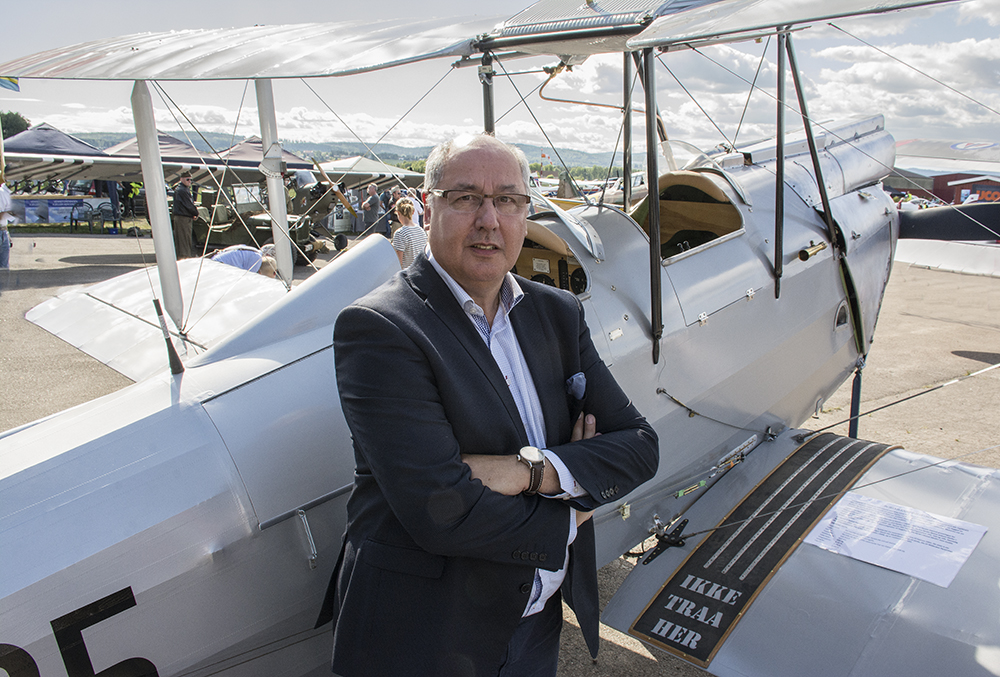 Robertus (Rob) Josephus Maria Mulder (born in Bussum, Netherlands, on September 5, 1958) is a Dutch specialist in airline and the air transport history. Educated at the Heilige Hart School, John F. Kennedy School, Vondel School, Fontein MAVO in Bussum and Roland Holst College in Hilversum, he left the Netherlands after serving the military in Amersfoort and Seedorf (Germany). He settled in Norway, married and started after a business study at the Otto Treider’s private school in Oslo working for Tumlare of Scandinavia (later Tumlare Corporation). Relocated back to the Netherlands in 1989 he began a five years employment for Buro Scandinavia, but finally returned to Norway in 1994. Back in Norway he worked for Kilde Hotels Marketing, Kilde Norge AS and since 2001 for Nordic Tours Norge AS in Drammen and now Røyken.

Mulder is married to Monika Müller. They have three children (one daughter and two sons). He lives in Spikkestad, Norway. As well as his life-long interest in aviation, Rob enjoys also genealogic research and is active member of the Bardstjernen Lodge in Drammen.

Period 1977-2018
Mulder made his first airplane trip in 1977 when he flew in a Douglas DC-9-32 from Vienna to Amsterdam. He was allowed to enjoy parts of the flight in the cockpit. The oldest aircraft he has flown in so far was in August 2008 the Douglas C-47 / DC-3 of Dakota Norway, when he made a flight from Sandefjord Airport Torp (Norway) to Aalborg (Denmark) and return.

His first interest was the history of aviation in Austria. He wrote many pages of an unpublished manuscript on the subject. During his school years in Hilversum he published a small private aviation magazine covering news about civil aviation. He also started to write about the history of European airlines that were operating between 1910 and 1945 and finished up with over a 500-pages manuscript. Many of the histories from this manuscript ended on the web, under www.europeanairlines.no. This site was opened in September 2007.

April 2014: The Norwegian Aviation Museum in Bodø, Norway elected Mulder as “Aviation Enthusiast of the Year 2013“.

First book published
In 1987 Mulder published his first book in Norway: Luftbussen til Kontinentet about the first international air service operated out of Norway. It is a biography about Captain Wilhelm Meisterlin and his airline Norske Luftruter AS, who acted as general agent for Deutsche Luft Hansa AG in Norway between 1927 and 1934.

Series: A Piece of Nordic Aviation History
In the beginning of the nineties he started to work on a new book called “Junkers for Scandinavia”, a history of the German influence in Scandinavian and Baltic airlines up to the year 1926. This book specifically details the work by Junkers Flugzeugwerk AG in Norway, Sweden, Iceland and Denmark. It also describes in detail, the history of the Danish airline Dansk Lufttransport AS. It was not published until 2007, and it was awarded the Norwegian Aviation Book of the Year Award for 2008. The book was the first of a series of books under the subtitle A Piece of Nordic Aviation History. Further titles followed in the next years:

May 2009: Ternen – Junkers W 34hi, LN-DAB, DNL’s første trafikkfly, 1935-1946, about the first airliner of the Norwegian airline Det Norske Luftfartselskap, Fred. Olsen & Bergenske AS. It was published in the Norwegian language with an English translation available.

May 2010: Valkyrien – Sikorsky S-43, LN-DAG, DNL’s amfibiefly, 1936-1938, about the amphibian of the Norwegian airline Det Norske Luftfartselskap, Fred. Olsen & Bergenske AS. It was published in the Norwegian language with an English translation available.

In November 2009 Mulder published the book ELTA – The First Aviation Exhibition Amsterdam, 1919 about the first major aviation exhibition after the First World War, held in Amsterdam between August 1 and September 14, 1919. More than one hundred aircraft visited the exhibition and more than 500,000 visitors were registered. The book was awarded Book of the Month in the British aviation magazine Aeroplane Monthly (April 2010) and rated Absolute Fabulously.

In co-operation with freelance aviation journalist Günter Endres, aviation historians Lennart Andersson and Günther Ott, Mulder published in September 2013 the book Junkers F 13 – The World’s First All-metal Airliner. This book was followed up in February 2015 with the book Junkers W 33/W34/K43 – Workhorse in War and Peace and in November 2016 with the book  Junkers G 24, K30 and G 31 – Stepping Stones. Latter two books were written by Lennart Andersson, Günter Endres and Rob Mulder.

March 2014: His second biography is published called “Olav Grønskar – Flykapteinens likemann på bakken” about a flight dispatcher that started working for DNL – Norwegian Air Lines in 1939. After World War II, he continued working for the New DNL and later SAS. He was a very active person in music and volunteer work at the SAS-Museum. He is now 93 years old (2015).

June 2018: The book “The Beginnings of Norway’s Airlines, part 1, 1918-1922” is published celebrating the centenary of commercial aviation in Norway. On July 10, 1918, Det Norske Luftfartrederi was formed as the first national airline in Norway. Beside this airline numerous other initiatives started up with more than twenty aircraft imported to this small country, including German and British surplus aircraft, including Supemarine Channel, Travemünde F4L, Friedrichshafen FF49C and Hansa Brandeburg W29 and W33.

June 2020: The book “Kjeller – Vi Lander – en luftig bok om sivile fly på Kjeller før 1939” is published. It is a book in the Norwegian language about the arrival of civil aircraft on the military airfield of Kjeller, just north of Oslo up to the opening of the Oslo-Fornebu airport on June 1, 1939.

November 2020: The book “Pan American in Norway, 1935-1991″ is a book (76 pages) in the English language about the operation by Pan American World Airways and its services to Norway.

Memberships
Mulder was member of the now dissolved Norsk Flyhistorisk Forening. He is now member of Svensk Flyghistorisk Förening, Dansk Flyvehistorisk Forening and Air Britain. He runs several websites: www.europeanairlines.no; www.oliverrosto.com, www.eambooks.com, www.flyblader.com and www.chrisbraathen.com. Many articles for websites and aviation magazines have been written and published by him.