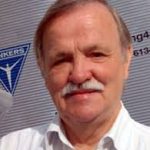 The popular book “Focke-Wulf Fw 200 Condor with Danish Air Lines in War and Peace” was sold out, but a re-print has arrived!

In 1988, Tom Weihe in Denmark wrote the history of the two aircraft in service with Det Danske Luftfartselskab A/S – DDL (Danish Air Lines Ltd.). However, it was publized in magazine size and in Danish. Tom Weihe has allowed us to rewrite the book and translate it into English. We have added new facts as well as numerous new photographs. In addition, Juanita Franzi has made ten beautiful detailed colour profiles for this book.The book tells the story of one of the finest civil airliners built in pre-war Germany. The Danish preferred the aircraft above the Douglas DC-3 as it was regarded as superior in performance and number of passengers. Another reason was that spare parts could be ordered in Germany, Denmark’s nabour. The aircraft were taken in service in 1938, and remained in service until one of them was confiscated by the British (April 1940), while the other continued flying until 1946. It too ended its days in England. Beside these two aircraft, Danish Air Lines was offered two ex-German military aircraft, of which one made it to Copenhagen, while the other had a bad take-off. Read all about this in the book.