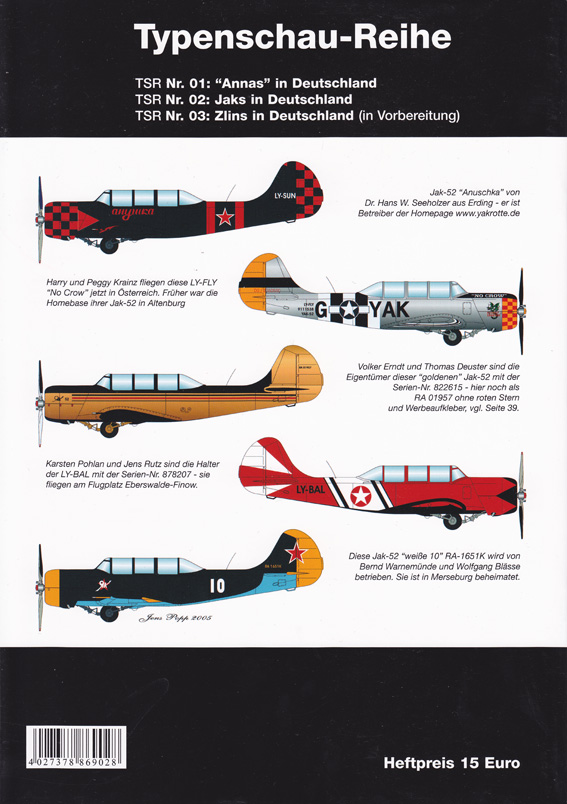 After the booklet on the Annas (An-2), Detlef Billig published a new booklet on Yakovlev aircraft in Germany. The book deals with sports and training aircraft from the house of Jakovlev. It deals with the varieties of the Jak-18 and Jak-11 as well as their modern successors. After a description of the Jak aircraft in the former German Democratic Republic he continues to the actual state. Jak-18 and Jak-50/52 are very popular in the Warbirds scene since the machine looks like many WK II fighter and the cost of service is moderate. Accordingly, many “war memorials” are found in the booklet. Needless to say, the original Jak-3 and Jak-3U from Freiburg will also be introduced. The author also refers to the current (2005) production situation of the Jak-52 in Romania and its conversions in Lithuania. In Germany, almost all airplanes are flown with RA or LY approval, as no holder wanted to spend money on a German type approval. The blackjacks of the FLIEGERREVUE-Airshow team can not be missed. A first list of all the Yaks in Germany completes the booklet.

Nice for the model builder are the references to kits of Jak-50/52 and Jak-18 in 1:72 by Amodel and the color profiles (by Jens Popp) as well as a lot of detail photos.