One of the first books I bought, as a fresh aerophilatelist was N.C.Baldwin’s “Bridging the Atlantic”. It is stated in the book’s preface: “So far, as we are aware, no really comprehensive chronicle of projected and successful special and first flights has appeared hitherto in any language (about Atlantic flights). This work is therefore an attempt to fill the gap through a concise, essentially factual chronology of events”. This was written in 1945 and still holds true.

The book tells of triumphs and tragedies, of the latter there are about 80 unsuccessful attempts to conquer the Atlantic. There is a dramatic history behind every short record. The story cannot be told of 17 of the attempts; both plane and crew were lost at sea. This story is about a narrow escape, where the crew in the end had luck on their side. Of several of the flights recorded by Baldwin, it is not known whether mail was carried or not. For obvious reasons, no mail exists from the lost airplanes, which is also the case in this story. Initially, it is not known whether this plane carried mail. In Baldwin’s book, this flight is recorded as No. 137: “1931, Sept. 13. Unsuccessful Berlin – Lisbon – USA attempt by W.Rody, C.Johansen and C.Viega. Forced down at sea and rescued after six days”.

The flight
The airplane, a Junkers W33, with registration D-2072 and named “Esa”, was originally used by Lufthansa for the conveyance of mail across the Atlantic. She crashed May 1931 at Natal while taking over mail from “Cap Arcona”. After the crash, D-2072 was repaired and sold to Willy Rody, Bad Ems, Germany. It was an international crew on this transatlantic attempt. The pilot, Christian Johansen was Danish, the co-pilot Fernando da Costa Viega was Portuguese, and the airplane’s owner and navigator Willy Rody was German. After the plane was flown from Berlin and made ready, it started from Juncal do Sol, five miles from Lisbon on Sunday morning 13th September 1931. The plane headed for the Azores. The weather was fine at first and they passed the Azores at 6 p.m., but then the weather deteriorated. The barometer fell suddenly, and during the nighttime they flew into a furious storm. The strong wind made it impossible to maintain a steady course. Periodically, they flew round in circles. On Monday afternoon, the instruments indicated that the engine was not running as it should, and they had to head for the nearest land. However, luck was not on their side. The fuel, which should have lasted for 48 hours, ran out after 36 hours.

The crash
About 92 nautical miles at sea from Cape Race, the engine died, and the airplane had to be put down on the sea. It settled remarkably easily on the surface. However, large waves washed against the fuselage, and the wings were quickly filled with water and destroyed. All three managed to get out of the plane and clung to the fuselage as best as they could. But before the crash-landing, they had forgotten to secure the food and other necessities. Everything was washed into the sea. When it became colder during the night, they retreated to the cabin where they stood in water up to their waists. They did not have anything to drink, apart from the engine’s cooling water, an undrinkable water mixture that invariably came up again. To their astonishment, the plane was still afloat the following day. On Wednesday, the crew did not dare to stay inside the cabin for fear that the plane would disappear into the deep. They clung to the outside of the fuselage. One more day passed, and another, and yet another. The airplane was kept afloat by the empty fuel tanks. The wind increased again during the night to Friday. More and more of the fuselage was pressed down by the frothing sea, but even on Saturday the forces of nature did not manage to send the plane to the bottom of the sea.

A ship was spotted this day. Flags were waved, but the ship disappeared into the distance. It would seem like they were doomed, but they held out another two days. At this time, a ship was on its way from Albany near New York to Leningrad in The Soviet Union, loaded with ten large locomotives each weighing 160 tonnes. She was M/S “Belmoira” of Oslo. During the morning of Monday 21st September, the First Officer was on duty. He was about to measure the sun’s meridian, when he spotted something shining in the distance. He went higher up on the ship and discovered it was an airplane.

The rescue
The three onboard the wrecked plane had long since seen the “Belmoira”. With their last efforts, they waved and shouted as best as they could. 156 hours after the emergency landing, they were taken onboard and received treatment. The Junkers airplane was still afloat, and the captain contemplated whether or not to salvage the wreck. However, the deck was crowded due to the train cargo, so D-2072 was entrusted to the sea. 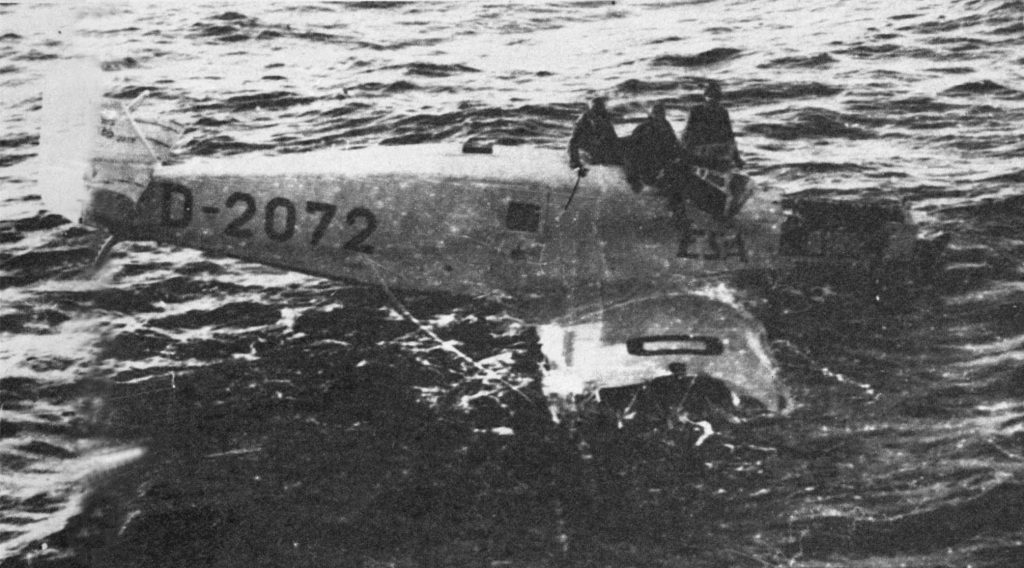 The wreck of D-2072 with the crew on the fuselage.

The ship was on her way to The Soviet Union, but the three from the airplane preferred to go to USA. The telegrapher on “Belmoira” made contact with the Norwegian passenger ship “Stavangerfjord” on its way to New York. The two ships met in the Atlantic the following day, and the three were transferred to “Stavangerfjord”. 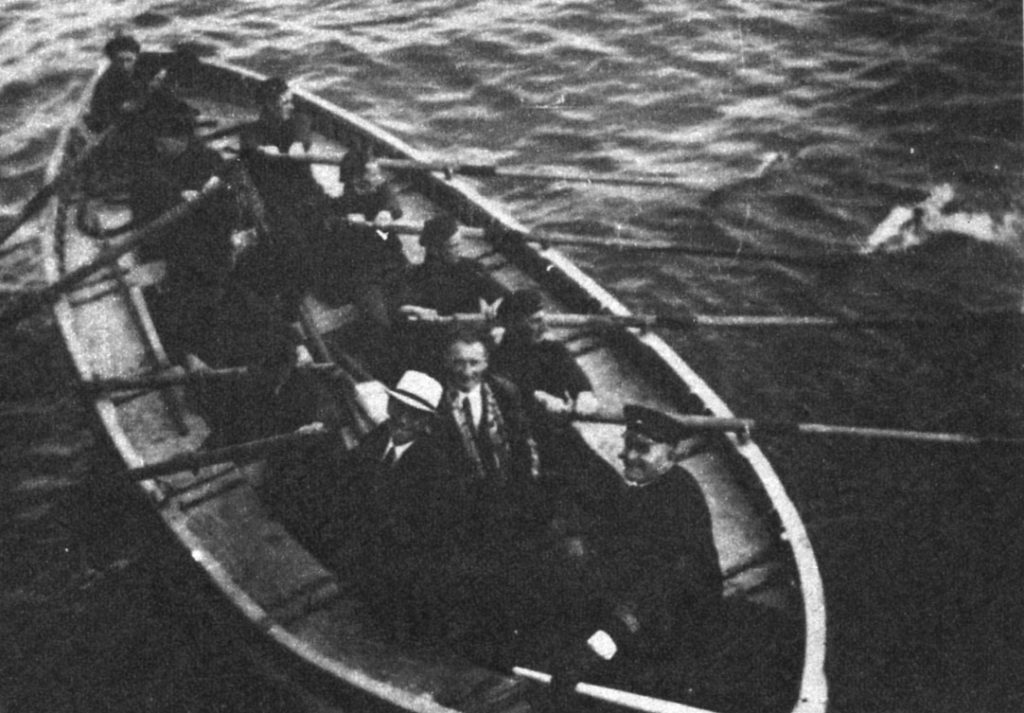 The crew from “Esa” is being transferred to S.S. “Stavangerfjord”

Epilogue
The fates of Christian Johansen and Willy Rody are not known. However, Fernando da Costa Viega, who was 21 years old and had just finished his pilot training in Germany prior to these events, never flew again. He was educated as an engineer and kept his feet firmly to the ground. “Belmoira”, which was built in Newcastle upon Tyne in 1928, left Dakar alone on June 18th, 1940, in ballast for Southampton, and was torpedoed by the German submarine U-26 in the early morning of June 30th, about 250 miles southwest of Lands End. All of the crew went to the lifeboats. About five minutes after she had been hit, she broke in two and sank quickly. Two Spanish trawlers rescued the men in the lifeboats late the same afternoon. The German submarine U-26 made her seventh sailing leaving Wilhelmshaven June 20th, 1940. After the sinking of three ships, among them “Belmoira”, she attacked convoy OA 75 on July 1st and was counterattacked by depth charges from HMS “Gladiolus” and HMS “Rochester”. The crew scuttled and abandoned the submarine, which went down stern first. All 48 crew were rescued and became POW.