The first aircraft owned by private persons date from right after the end of the First World War. Especially companies soon realized that the aircraft could take them across the country or the world to all kind of places where the airlines did not come. In this article, we will present one of the larger private aircraft around, the Fokker F.VIIb-3m. The text of this article is an extract from the series of books (four volumes) written by Theo Wesselink about the Fokker F.VII. These books can be obtained through Dutch Aviation. 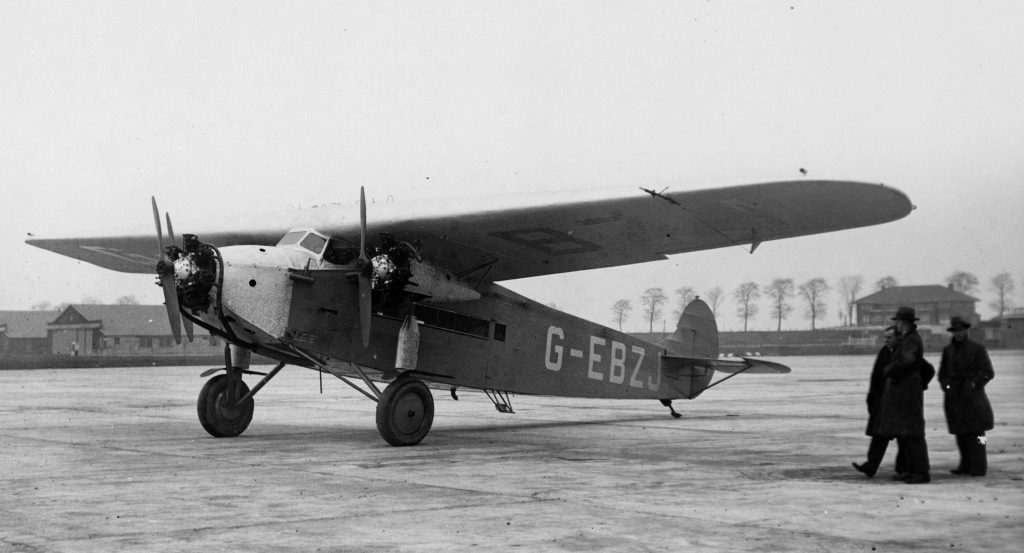 Andrew Paton Holt (1893-1964) was a Canadian businessman living in London. In the Spring of 1928, he had lunch with the British pilot Robert Henry McIntosh and told him that he was to establish an aircraft developing company. He also told him that he just had purchased a brand-new Fokker F.VIIb-3m from the NV Nederlandsche Vliegtuigenfabriek (Fokker) and asked him to become his private pilot and advisor in aviation matters. Robert McIntosh agreed and the two gentlemen became good friends, and Andrew Holt respected the opinion of him about weather related matters or if it was not possible to fly to a destination. McIntosh stood always ready to fly him wherever he wanted to go to, and they discussed how to get there. He would work for four years for Andrew Holt and they were the happiest four years ever.

The Fokker F.VIIb-3m assigned by the NVNV to him had the constructor’s number 5087. In 1924, Walter Retheldesigned the F.VII as a single-engined transport aircraft. Anthony Fokker had the company’s head designer, Reinhold Platz, convert a single-engined F.VIIa airliner to a trimotor configuration, powered by 200 hp Wright Whirlwind radial engines. The resulting aircraft was designated the Fokker F.VIIa-3m. Following shipment to the USA, it won the Ford Reliability Tour in late 1925. The Trimotor’s structure consisted of a fabric-covered steel-tube fuselage and a plywood-skinned wooden wing. The Fokker F.VIIb-3m had three 215 hp Armstrong Siddeley Lynx engine, giving it cruising speed of 175 km/h. The range of this model was 1,600 km. In addition, this aircraft was improved and had radio telegraph, wheel brakes, mudguards and dual control. The interior included six (instead of eight) chairs with large pitch and leg space. There were folding tables, special silver batter, a cocktail bar. a fridge, Persian carpet on the floors and other luxurious items. It was generally known as an Air Yacht.

It was registered on June 22, 1928, as H-NAEL and as such test flown. The next day, Robert McIntosh flew the aircraft from Amsterdam-Schiphol to London-Croydon, where it was registered as G-EBZJ. Andrew Holt gave it the name «Petal». It received its Certificate of Validation on July 7. The British Air Ministry demanded the aircraft to be check in the Netherlands once a year. In general, KLM Royal Dutch Airlines stood for the major overhaul, while Georg Young, KLMs mechanic at Croydon, stood for the daily overhaul. During the flights, Robert McIntosh was assisted by the engineer ‘Jevro’ Jenkins.

The aircraft was more abroad than at London-Croydon. Andrew Holt had a summer house at the French bathing resort Le Touquet and his aircraft was most of the time at the small airfield Berck Plage nearby.

The Fokker F.VIIb-3m, G-EBZJ during a visit at Zürch-Dübendorf. A Junkers F 13 CH 92 of Swissair in the background. (ETH Zurich Image Archive)

Andrew Holt was not often at home, and made numerous flights around Europe. He travelled from Spain to Scandinavia. It is known that the G-EBZJ «Petal» was at Kjeller, the land airfield of Oslo, on August 10, 1929. He visited Oslo together with two other gentlemen. He is known to have been in Zürich, Prague and Vienna. In the first year he flew a staggering 90,000 km.

The Fokker F.VIIb-3m, G-EBZJ during a visit at Kjeller airport near Oslo, Norway

In July 1929, the Aircraft Investment Corporation Ltd. (AIC) was formed and Andrew Holts idea was to invest in engine and aircraft manufacturers and replace them by one company. He bought Saunders-Roe Ltd and Blackburn Aeroplane and Motor Company Ltd. Technical director was Sir Henry Segrave, holder of the world speed record on land: 372.6 km/h. Unfortunately, Sir Henry was killed in a boat accident on June 13, 1930. The economic recession (from October 1929) made it difficult for the company to come with a good design and one aircraft type was only sold in four. The aircraft was known as the Segrave Meteor, Saro Meteor or Blackburn Segrave. The plans of Andrew Holt did not materialize.

The Fokker F.VIIb-3m, G-EBZJ «Petal» was for a last time in the air for a flight of Andrew Holt with some friends, a few days after the fatal crash of the airship R.101 at Beauvais in France. This flight was on October 5, 1930. The aircraft seems to have been sold «abroad» shortly afterwards, but there is trace of it after its British registration was deleted.

Later we will also present a second Fokker-aircraft, a private-owned Fokker F-32.

You can find more information about the books on the Fokker F.VII at the website of www.dutchaviation.nl.