Widerøe’s Flyveskole (Wideroes Flying School) was the flying school of the airline Widerøe’s Flyveselskap itself formed in 1934. In the week of May 2 to 8, 1938, three pupils of the Widerøe’s Flyveskole made a study trip to Germany with the company’s Stinson SE-8M, LN-BAR. The participants were traffic pupils and were: Chr. F. Walter, Holger Hannestad, Trond Kindset. They were under the command of the school’s chief instructor Martin Hamre. Here a short report of the visit. The photographs have not been taken during the visit, but are merely used as illustrations. The report has been written by Martin Hamre and had been published in the Norwegian aviation magazine Fly Nr. 5, 1938. The text has been a bit adapted. 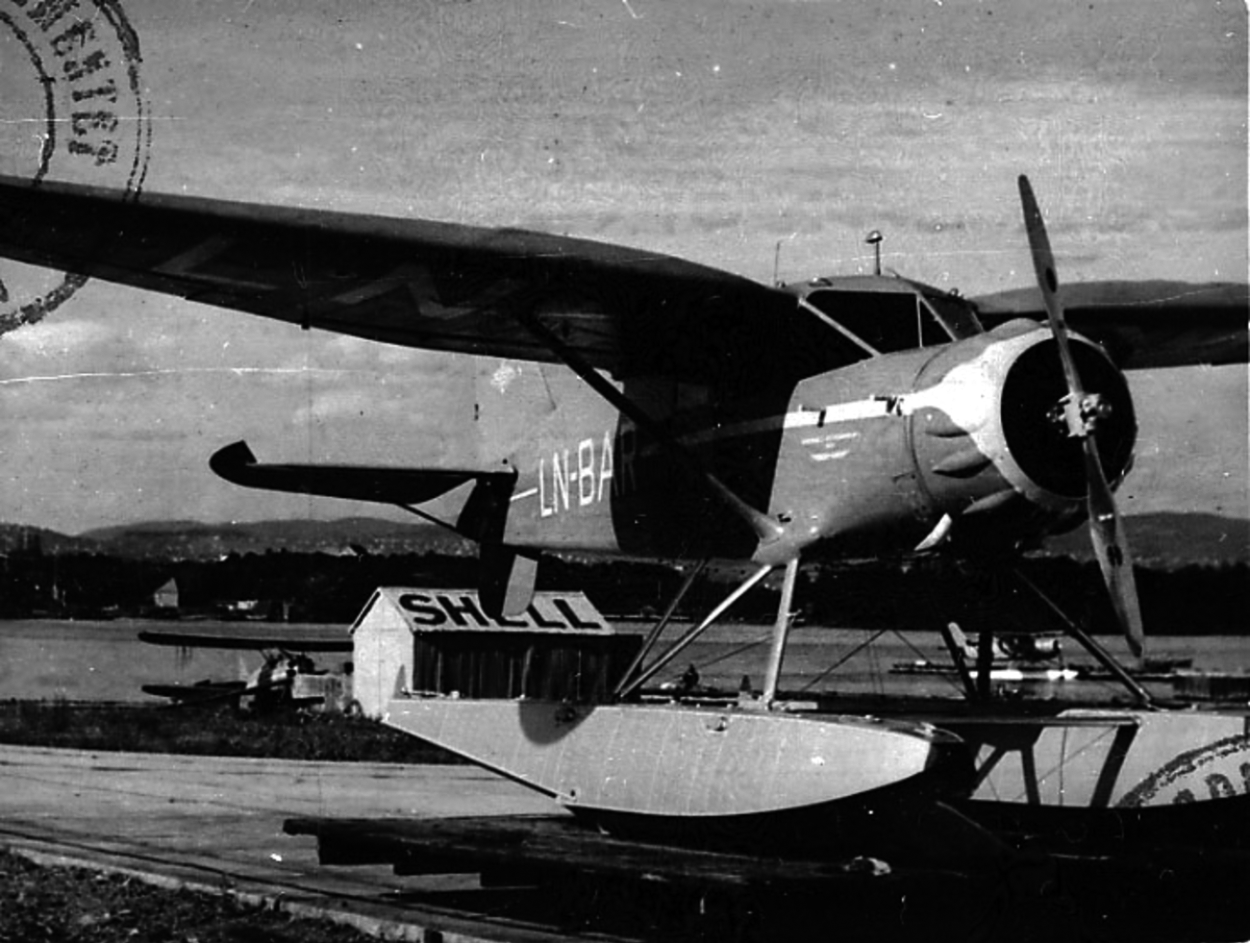 The aircraft used on the visit to Germany. This is the float version, but the floats were replaced by a fixed undercarriage. (via Kay Hagby)

The study trip was educational and gave good possibilities to train in flying and navigating under different circumstances. The weather was bright all the way to Berlin and Hamburg, while the return was made in strong head winds and sleet showers. The pupils flew and navigated most of the time independently. Martin Hamre told the following: On Monday 2 May, they we started with LN-BAR from Kjeller. The aircraft’s floats had been replaced by a fixed undercarriage. At 11.49hr they arrived at Torslanda and were invited for some lunch. At 13.00hr they continued to Malmö-Bulltofta. In Malmö they had the opportunity to see the overhaul of the modern Douglas DC-3 of AB Aerotransport. From Malmö the four travelers continued to Copenhagen-Kastrup, where they arrived at 18.43hr. They stayed overnight and in the morning, they had a visit to the technical workshop at the airport and were given the possibility to fly a new Danish-constructed low-winged monoplan with a 90 hp Cirrus engine.

The Haus der Flieger of the Aeroclubb von Deutschland was a former parlaiment building. (wikipedia)

At 14.10hr, they took off for Berlin-Tempelhof. The flight from Copenhagen to Berlin was navigation-wise the most difficult stretch for the pupils since there were numerous non-flying zones. Upon arrival at Tempelhof, the gentlemen were invited as guests to the “Aeroclub von Deutschland” in the “Haus der Flieger”  and after that they travelled to Rangsdorf, a bit outside Berlin. The “Haus der Flieger” is none the less that the former Prussian parliament building, beautiful and modern equipped, donated by Herman Göring. As a club house it was quite impressive.

The four Norwegians visited the Bücker-Flugzeugbau at Rangsdorf and flew the Jüngmann. Shown here a Swedish Jüngmann just before its delivery to Sweden. (via Lae – inte bara en stad på Nya Guinea)

The visit to Rangsdorf flying school was an highlight. The Germans went in for their task with life and soul, and every last detail here was so beautifully and expediently executed that it had to impress. The school had 70 training aircraft at its disposal, its own school buildings, workshops, hangars, sleeping facilities and club rooms. At the club they were warmly received. At Rangsdorf lies the Bücker Flugzeugbau GmbH (Bücker Aircraft Co Ltd.). This was visited the next morning. About two aircraft-a-day are completed by the factory throughout the year. At that moment, the factory was working on a big order from South Africa for aircraft of the type Bücker Jüngmann. The various different parts were cut, machined, welded, painted, put together and finally collected to the factory’s center, where they began to look like an aircraft, canvased, equipped with instruments etc. to finally leave the factory fully ready for use.

Bücker Jüngmann was flown by the students as well. Martin Hamre was also allowed to try a Bücker Jüngmeister, one of the world’s best acrobat aircraft. Both aircraft have excellent flight characteristics, but it turned out for us Norwegians that they were a bit too small and light. “Der Riese aus Norwegen, Hannestad” (the giant from Norway, Hannestad) spent almost half an hour settling into the little Jungmann, and when he finally got in place, his head protruded high above the windshield, his legs curled forward in the cockpit. The Jüngmeister was a delight to fly with its 150 hp engine. It turned as the best of its ability, three rolls while climbing were made like nothing, and a loop on top could easily be allowed.

After Rangsdorf, Tempelhof was visited. It was undergoing expansion and would not be fully completed until 1940. The new Tempelhof was an impressive work where only the administration building covers an area as large as the entire Kjeller airport. The hangars will be 1,300 meters long. The radio system was looked at, as well as air traffic control and more. The airport was visited daily by approx. 200 aircraft. The new administration buildings with her 2,000 office rooms and premises were already booked out and plans were underway to expand. This gives just a small idea of the interest in the aviation and flying in Germany. 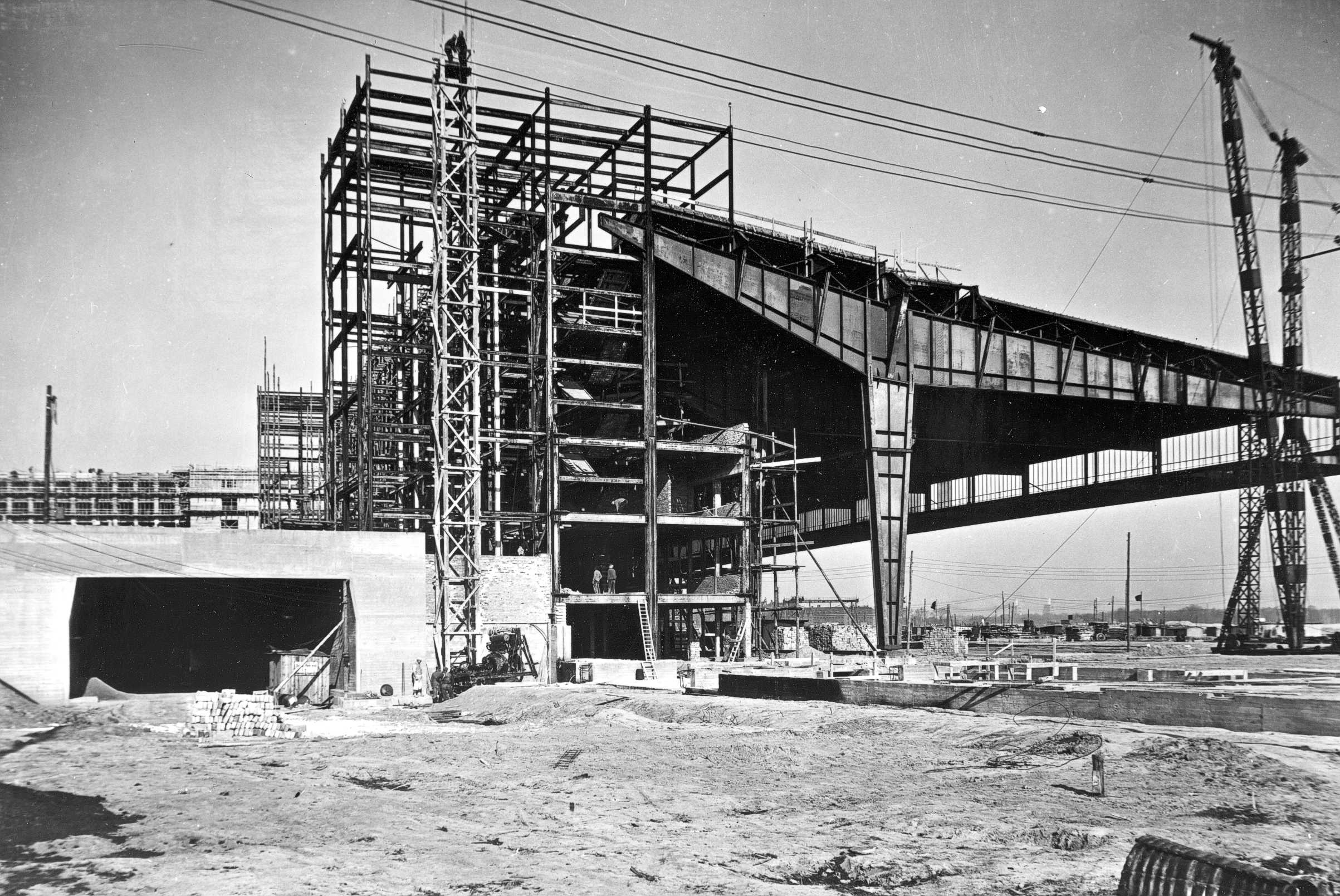 The airport Tempelhof under construction. This shows the covered parking spaces for the aircraft. In 1940 the airport was inaugurated. (via Brandenburg Airport, Germany)

After Berlin, they travelled to the Arado aircraft factory in Brandenburg. This was a military facility and airport, so they had some difficulty in getting down, but when they first managed to land, the reception was so surprisingly hospitable and gracious that they felt right away at home. A perfect dinner awaited. We got a reception that they had never dreamed of, and when our host finally in a well-formed speech wished them “Hals- und Beinbruch”, it was not free for us to feel our knees, at least when Martin Hamre had to reply. But then it went without major problems, even though the German grammar was abused somewhat.

A civil registered Arado in this case the prototype Arado Ar 96 V 1. (via https://www.airwar.ru/enc/other2/ar96.html)

At Arado Werke, they got to test an Arado Ar 96, a low-wing, all-metal monoplane with 240hp engine, retractable undercarriage and flaps. The chief engineer explained the different handles and said “Bitte” (be my guest), and Martin Hamre sat down in the cockpit and took off. The push of a button and the wheels went up, another handle regulated the flap and then the speed was suddenly up to 300 km/h. When the gas handle was touched, a siren began to howl something horrible to alert the position of the wheels. This was a transitional aircraft and seemed somewhat heavy at first glance, but is certainly good as a military aircraft.

The factory of Focke-Wulf Flugzeugbau at Bremen.

From Arado they flew to Bremen where Focke-Wulf was visited and where they met Mr. Vogel who was well-known in Norway from his many visits there. Saturday we were in Hamburg and on Sunday we flew back to Oslo over Copenhagen in nasty weather, sleet and wind, a dream scenario for navigation for these traffic students. On May 8, 1938, the returned to Kjeller airport, just north of Oslo.