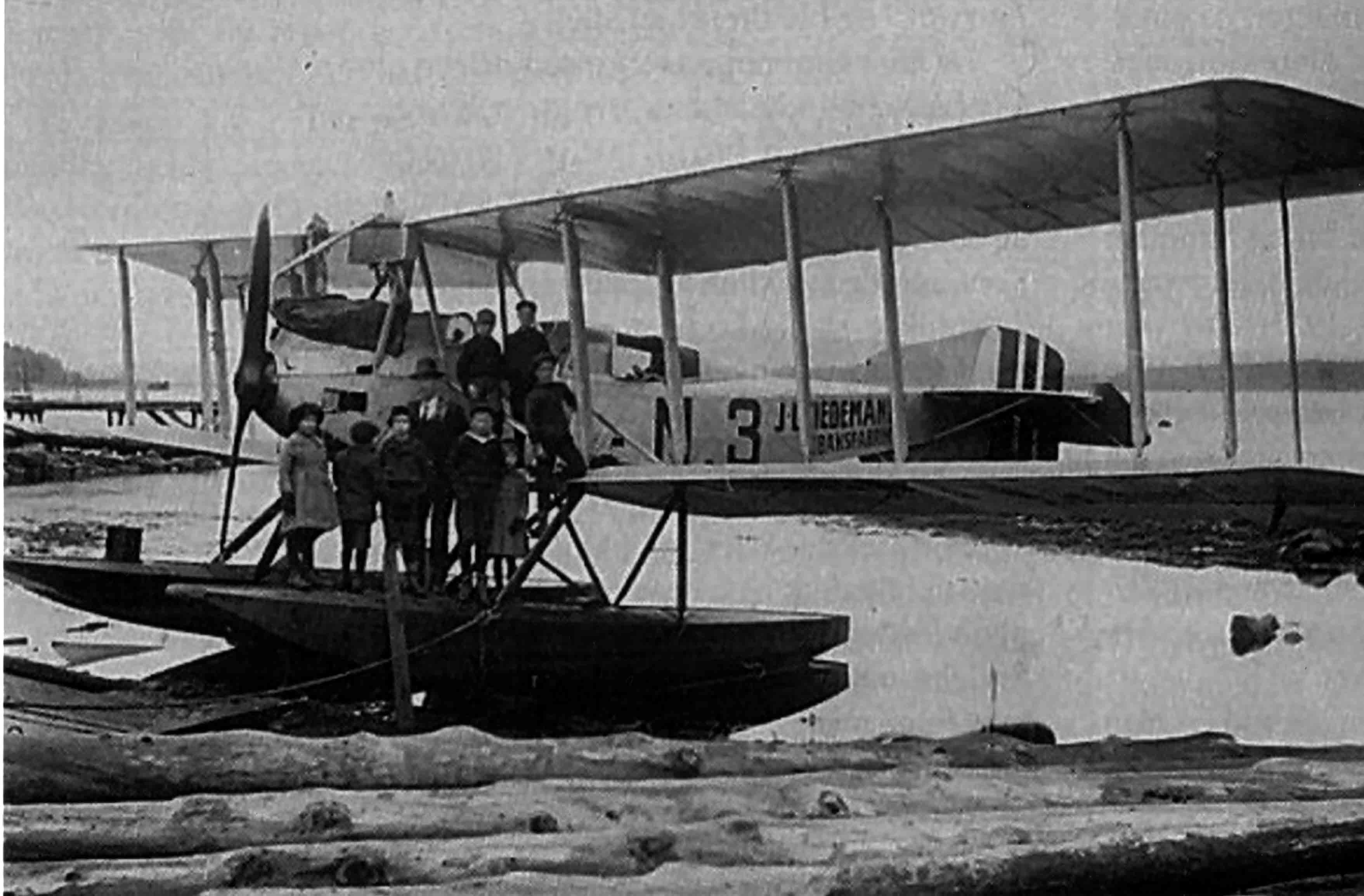 Children were facinated with aircraft and were here allowed to climb on the Friedrichshafen FF49C, N.3 of J. L. Tiedemanns Tobaksfabrik. (via Kay Hagby)

In 1920, the Norwegian tobacco compay ‘J.L. Tiedemanns Tobaksfabrik’ purchashed its first aircraft for advertisments flights and named it ‘Silver Spinner’. During the next two years, a second aircraft was purchased, that was given the name ‘Tiger’. We follow the history of the two aircraft. The ‘Tiger’ was involved in the first civil aircraft accident in Norway.

In November 1920, the J. L. Tiedemanns Tobaksfabrik (a tobacco company from Christiania, now Oslo) purchased from the assets of DNL for 23,000 kroner the Friedrichshafen FF49C, N.3. The tobacco company used the seaplane for advertisement flights and gave it the name ‘Silver Spinner’, named after one of its cigarette brands. During the winter, it operated on flights above cities, where packages of cigarettes were thrown down. In November 1921, it was the first to visit Molde (where the pilot Niels Hellesen was born). At Molde, during a joyride, the seaplane had to make a forced landing, which ended well. At these places, the joyrides cost 5 kroner for a 15-minute flight. 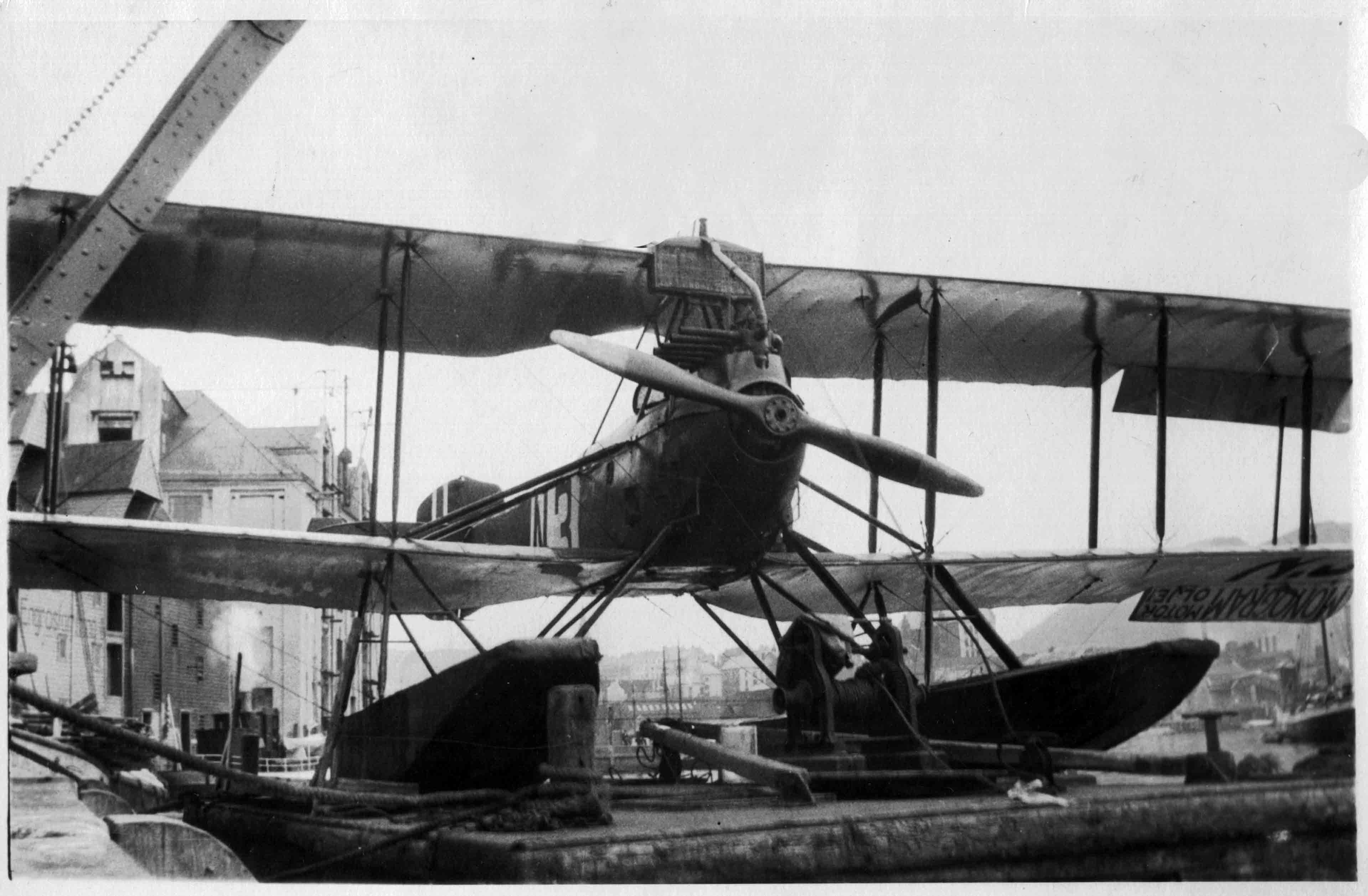 When Niels Hellesen and Alfred Sunde took over the aircraft, the canopy was removed. Note the advertisement written under the flap on the port wing. It reads: ‘Monogram motorolje’. (Monogram motor oil). (via Kay Hagby)

After New Year, the factory was not too interested in keeping this aircraft much more longer. On 9 March 1922, the factory and Johan B. Stang agreed the sale of the Friedrichshafen FF49C, N.3 at a price of 10,200 kroner. The two parties made a similar contract as the year before Tiedemanns Tobaksfabrik had made with Hellesen and Redlich. Stang would pay down 3,000 kroner on the day of the signing of the contract, and the remaining 7,200 kroner in five instalments of 1,400 kroner each. They also agreed that as a guarantee, Stang deposited six shares in the company Trælandsfos AS, each worth 500 kroner. Stang was responsible for all operational costs and insurance (for 7,000 kroner). Leif Lier borrowed the aircraft from Tiedemanns Tobaksfabrik and there was even a rumour that the aircraft was used for the smuggling of spirits during the prohibition time in Norway … On 2 April, the aircraft made a forced landing, but seems to have been repaired as on 12 April, passengers could book seats for a flight from Christiania to the carnival at the Victoria Hotel in Åsgårdstrand on 17 April. The flight cost 100 kroner per person and would take 30-45 minutes. Already on Saturday 15 April, he flew to Åsgårdstrand and offered joyrides. After this event, nothing more is heard about the operation of the aircraft.

The Hansa Brandenburg W33 (F.F.8 Maaken) was one of the few aircraft put together at the Norsk Aeroplanfabrik. It is seen here during its final assembly. (via Kay Hagby)

Hansa Brandenburg W33, N.21 ‘Tiger‘
Meanwhile, Tiedemanns Tobaksfabrik ordered a new aircraft: a Hansa Brandenburg W33 with a 260hp Maybach IV-engine. The aircraft had been built by AS Norsk Aeroplanfabrik on behalf of Tiedemanns Tobaksfabrik under the control by Naval First Lieutenant Finn Lützow-Holm from the Marinens flyvåpen. The parts had been manufactured at different places and gathered in Ørsnes at the factory. Director Hellesen called the aircraft F.F.8 Måken, which was the same type of aircraft its factory built for the Hærens flyvåpen. As such, it was temporarily registered N.21 on 17 March 1922, and would later get the name ‘Tiger’ after one of the cigarette brands of the company. On 29 March, the aircraft was insured and ready to fly. Sergeant Johan Stang made the first flight, but it has not been possible to confirm the date. A problem was that the 260hp Maybach IV engine was heavier than the engine used by the Hærens flyvåpen and thus the struts had to be approved. Fortunately, Johs. Johansen in Marinens flyvåpen checked everything one more time, and it turned out that the wing of this W33 was over-dimensioned compared with the military version in operation in Norway. The maximum take-off weight of N.21 was with 2,050kg higher than the military version. The tubes used were therefore in perfect order and could be installed. The seaplane was ready for registration.

On the 3 June, Niels Hellesen was given permission for private flying for a period of three months. This permission was extended with the permit to carry passengers. The seaplane was painted with the logo of the cigarette brand and on 22 June, the Luftfartsråd agreed that the registration N.21 was painted on the engine cover. Again, this seaplane was used for advertisement flight above the cities. Niels Hellesen (as pilot, and cousin of Christian Hellesen, director of AS Norsk Aeroplanfabrik) and mechanic Alfred Sunde were employed to fly the Hansa Brandenburg W33.

On 7 July, Sunde had to change the propeller on the engine of the aircraft but did not have the original type at hand. He installed a Muld propeller with a diameter of 3.10m. Naval First Lieutenant Finn Lützow-Holm came to Bestumkilen for control and the engine was tested with the seaplane on the beach, after which a 15-minutes test flight was made. All was in perfect order. Unfortunately, the seaplane was not to serve Tiedemanns Tobaksfabrik for long. It started on a flight to the north of Norway, starting in Christiania and flew along the coast to Bergen, where advertising manager Oskar Aaslev came on board. By 17 July, they had reached Trondheim, where some minor repairs on the engine had to be undertaken. The next day, the seaplane made joyrides above the city. Two days later they departed to continue further north. Due to fog, they did not make it any further than Fossen, where they landed and moored the seaplane. It was not until Saturday, 22 July that they were able to continue their journey. By the time they got to Flatanger visibility was good and there were hardly any clouds. When they reached Rørvik, the population of this small community noticed the seaplane around 17.00hr. It flew at a height of 150-200 metres and had a rather high speed. People were of the impression that the seaplane was about to land. Suddenly, when the seaplane was above the village, it made a left-hand turn and skidded down towards the left and crashed at high speed right into the trees in the garden of the local storekeeper Mr. Fossnes. The seaplane hung in the top of the trees resting on its left wing. People rushed to the scene and were met with a cruel sight. The passenger and crew were still on board. Sergeant Hellesen was the first to be taken down to the ground, but he had already died. Mr. Aaslev could be taken alive from the wreckage, but passed away just twenty minutes later. His life could not be saved. Only the mechanic Sunde was taken out alive albeit unconscious. The local doctor helped him, and Sunde was transported by car from Rørvik to the hospital in Namsos. He died shortly afterwards. The cause of the accident was investigated by Naval First Lieutenants Hjalmar Riiser-Larsen and Finn Lützow–Holm, who were on their way in two Hansa Brandenburg W33s from the Marinens flyvåpen from Kirkenes to Horten. They landed at Rørvik on 23 July, took the statement of the eyewitnesses and continued later in the afternoon further south. Sergeant Niels Thorvald Schiøtt Hellesen was born in 1900 in Arendal and had started his military career at the Hærens flyvåpen in 1919. That year he received the international flying certificate number 134 and a year later the military flying certificate. He was regarded as a careful pilot, who never took chances. 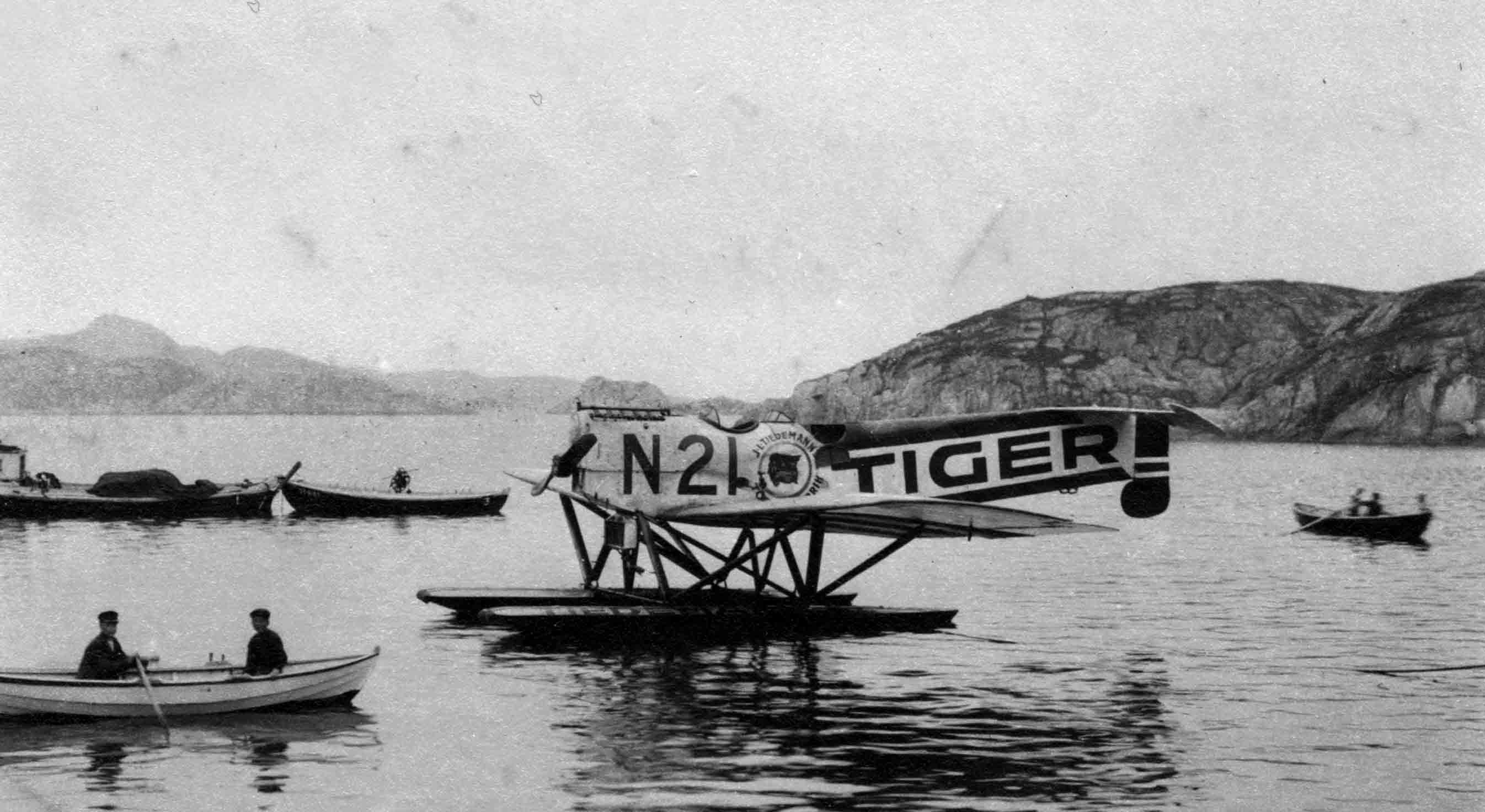 Photograph to the right has been taken at Trondheim, just a few days before it crashed at Rørvik. (via Kay Hagby)

Major H. Hellesen, father of Niels Hellesen, said that when Niels’ belongings were returned, he found a note for a telegram that was to be sent to the mechanic Christian Schmitz at the Norsk Aeroplanfabrik, asking him to come north and bring some gaskets along. The cooling of the engine seems not to have been a cause for concern. From witnesses it was clear that the engine was running at the moment of impact. The commission formed to investigate the accident asked six witnesses to explain what had happened at the moment before the accident. The commission said it was difficult to conclude if the accident was caused by a too short swing or if the pilot had an ailment or similar. An additional cause might have been that one of the passengers had touched the steering wires running through the passenger cabin. It had not been able to establish a conclusive cause. In July, the aircraft was cancelled from the air register, but its engine was salvaged and later used in the Caspar S-1, N.23.

READ MORE about these aircraft and early avaition in Norway in this book: 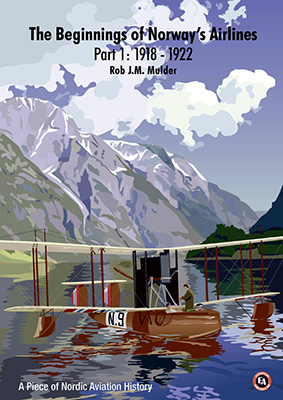