This is the first of a series of short articles about different subjects. They were found in Shell Aviation News and I found them interesting to reproduce.

The inclined walk by which passengers reach the tarmac can be seen beyond the aircraft. (Via Shell Aviation News, September 1938)

The special needs of aircraft and air traffic have been the subject of much study and new aerodromes demonstrate that in the design of aerodrome buildings architects have not been hampered by convention but have thought out for themselves an arrangement which is likely to give the greatest convenience in use. Although efficiency has not been subordinated to beauty, many of the architects have succeeded in giving the buildings a striking and pleasant appearance; among the newest aerodromes, one which stands out is the Forlanini airport at Milan, which has recently been completed.
The airport is situated in a locality called Linate, 7 kilometres from the centre of Milan. Communications between the airport and the centre of the town are good for the journey takes only 15 minutes by motor-car and about 40 minutes by tram or bus; services of the latter are frequent.
One of the most interesting features of the Milan airport is that the landing ground is situated alongside the alighting area for flying boats. The latter is formed by an artificial lake, 2,516 metres long and 200 metres wide in the centre, while the width is 300 metres and 400 metres at the north and south ends where the anchorage and embarkation areas are as well off the line of flight; the depth of the lake varies between four and six metres. A special basin enables flying boats to come alongside the aerodrome buildings.

The landing ground has a surface area of 3,000,000 square metres, with a maximum length of 2,400 metres and a maximum width of 1,400 metres. The height above sea level is 109.65 metres. The aerodrome is provided with a surfaced runway 600 metres long and 60 metres wide, running E.S.E./W.S.W., and with a shorter one connecting it with the apron. The second runway is 250 metres from north to south. There are no obstructions around the field except the buildings of the air station, the hangar, and the three 15-metre masts of the radio station. These obstructions are marked at night by red lights, and there is a beacon on top of the control building, while work is in hand for the installation of complete lighting equipment for night flying. A windsock and an illuminated movable “T” are provided on the aerodrome.

From the panoramic view of the aerodrome buildings at Milan Linate. (Via Shell Aviation News, September 1938)

A Shell station is being erected with a garage where the tank lorry, which is already in operation, will be housed. The passenger “station”, the hangar, and the various services are accessible both from the flying boat harbor and from the landing area and serve both types of traffic. Three blocks of buildings have been erected on the aerodrome: the larger contains all facilities and amenities for passengers. Here a driveway leads to the first floor where a large central hall is surrounded by offices for air transport companies, tourist agencies, shops, and banks. On the one side of the hall are the restaurant and bar, post and telegraph office, and on the other the customs and aerodrome offices. On the ground floor are mail and freight rooms as well as the first aid station and supplementary office accommodation. The building contains all the amenities of a first-class hotel, including sleeping accommodation, which is available on the third floor. From the central hall a covered walk leads to the apron, from which land aircraft depart.

The control building is situated behind the passenger station, and is also between the flying boat harbor and the landing field. This building is 146 feet long, 41½ feet height, and contains 75 rooms housing all the technical services such as the radio equipment, field lighting control room, and meteorological station. The beacon mentioned above is installed on the roof of this structure. The third building contains quarters and a mess for the airport personnel. The hangar stands between the field and the lake; it is built of steel with a concrete floor and apron. It measures 160x60x12 metres. Modern machine and repair shops are at both ends, while the sides facing the field and the lake each consist of 12 steel doors running on rails and operated by electric motors. A club house, hangar, and swimming pool, belonging to the Milan Flying Club, are situated near the buildings. 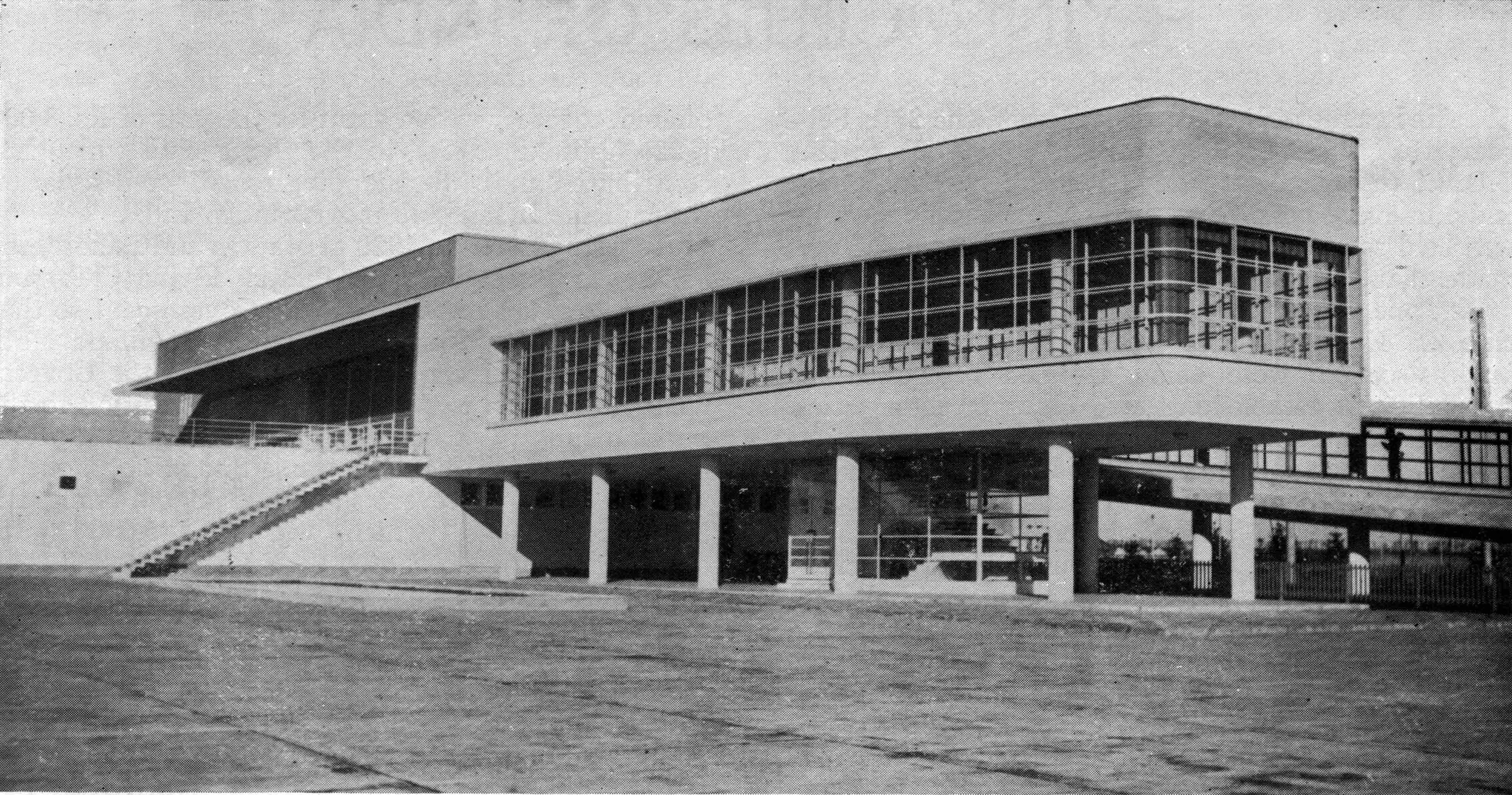 One of the new wings of the aerodrome Milan Linate. (Via Shell Aviation News, September 1938)

In the back ground the large hangar at Milan Linate. (Via Shell Aviation News, September 1938) 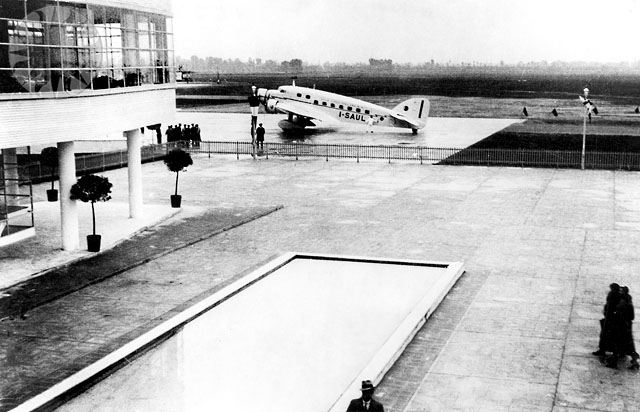 Taxiway and and part of the terminal building at Linate Airport, Milan, Italy, Avio Linee Italiane Savoia Marchetti S.73 (r/n I-SAUL) is on the taxiway. (Smithsonian Institution via Wikiwand)