The Eerste Luchtverkeer Tentoonstelling Amsterdam – E.L.T.A. (the First Aviation Exhibition Amsterdam) is a clear comprehension. Every aviation enthusiast (and not only in the Netherlands) has read, heard or seen something about this exhibition. However, a detailed account has never been published. In my opinion it is one of the most important events in Dutch aviation history and equal to the first flights to the Netherlands East-Indies. Abroad the ELTA was seen with great respect and the French wrote that they had not seen such an impressive exhibition since the aviation meeting in Reims in 1909. An immensely compliment.

The immediate cause for the organisation of the ELTA laid in the fact the Dutch people during the Great War (1914-1918) had lost contact with aviation. The ELTA had to bring a change and to instigate the inauguration of national and international air services. The initiative to the foundation of the KLM – Royal Dutch Airlines had already been taken well before the opening of the ELTA. The founders of the KLM wanted to wait with the final foundation until the ELTA had shown that the general opinion was favourable.

The preparations of the ELTA started already in the autumn of 1918, but in March 1919 the “Vereeniging Eerste Luchtverkeer Tentoonstelling Amsterdam” (Association to Further the First Aviation Exhibition Amsterdam) was formed with its seat in Amsterdam. The organisational committee under leadership of Lieutenant Albert Plesman, Lieutenant M J L Hofstee and the (retired) General C J Snijders was soon active. The Dutch architect Ir D Roosenburg was hired to design the exhibition area and in May 1919 the ground works at the Papaverweg (Papaver Road) were already finished. The construction of the buildings and the airfield could commence. Despite a short strike of the workers the halls and the administrative buildings were finished by July 1919. The scheduled opening date of 5 July 1919 could not be reached, but when the ELTA was opened on 1 August people had not much to complain. Not all the stands in the exhibition hall were finished yet and only a few aircraft had arrived. But this changed fast and at the end of the ELTA more than 100 aircraft had visited the exhibition. Among them were the modified Caproni bombers with as highlight the impressive triplane, the Caproni Ca.48. But also the British had flown over a considerable number of aircraft, among them the Handley Page V/1500 and the O/7, a large number of Avro-aircraft and the Airco D.H.4A, D.H.9A and D.H.16.

CHECK OUT FILM FOOTAGE:
Opening of the ELTA and the arrival of the Handley Page V/1500

There were also some racers, such as the Fiat B.R. (with a 700hp engines!) and the British Airco D.H.9R. Latter had only made a five-minute test flight before it was departed for Amsterdam. The French government showed to begin with not much interest in ELTA, but once they saw the impressive Italian and British participations they decided to fly over more aircraft. In the end they too had a respectable number of aircraft: fourteen.

There can be published a whole list of the participating aircraft, but lack of space forces us to mention just a few of them: From Italy arrived the Ansaldo A.1 Balilla and the flying-boats Macchi M.7 and M.8. From Great Britain landed three beautiful products from Frederick ‘Kully’ Koolhoven: the B.A.T. F.K.23 Bantam, the B.A.T. F.K.26 Commercial and the B.A.T. F.K.28 Crow. One of the F.K.23 Bantam, K-123 still exists today (at the Aviodrome, Lelystad in the Netherlands) and also one of the Avro-aircraft, the Avro 536 Baby (G-EACQ) is still on display in Australia.

From the Netherlands the ELTA saw two products from the Dutch factory Trompenburg: the Spyker V.2 and the prototype of the Spyker V.3. The Dutch Marine Luchtvaartdienst – MLD displayed a Friedrichshafen FF 49C and the Luchtvaartafdeeling had parked the Vreeburg A.2M on its stand. This was the first twin-engine in the Netherlands. In addition young designer Joop Carley showed his single-engine low-winged Carley S.1.

The ELTA was also a meeting point for the Allied pilots. There were several of them present, but we mention the ace of all aces, French Captain René Fonck, who flew his deep blue painted Spad XV/5 to Amsterdam. Other well-known pilots were the Italians Lieutenant Arturo Ferrarin and Francesco Brack Papa. A popular pilot was the Italian Lieutenant Umberto Guglielmotti, who was simple called ‘Motti’ in the Dutch press. But also ‘La Socieda Gio Ansaldo’s’ chief designer Giuseppe Brezzi and chief test pilot Mario Stoppani arrived in the Ansaldo A300/2. Of the British pilots we notice names as Major Christopher Draper (he later flew under nearly all the bridges of the river Thames!) and Lieutenant Eardley ‘Bill’ Lawson, who opened on 25 August 1919 the air service London – Paris). A popular British pilot at the ELTA was Regnald W Kenworthy, who flew the modified Blackburn R.T.1 Kangaroo. All pilots had certainly heard of each other, but most of them had never met each other. The ELTA made it possible.

But what activities took place at the ELTA, the First Aviation Exhibition Amsterdam. Except the exhibition in the halls (which were very interesting as well) the activities on the airfield drew most of the spectators. How many people there were at the ELTA is not quite clear and the numbers vary between 500,000 and 1,000,000. More than 4,000 of them made a joy flight. The daily activities on the airfield consisted out of joy and demonstration flights. Most of the joy flights were made by the Avro 504K and 536 and the Blackburn R.T.1 Kangaroo. Also ‘Fokker’s Luchttoerisme’ (Fokker’s Air Tourism) operated numerous aircraft as the LVG B III, Fokker D VII and Fokker D VIII.

One of the most popular pilots was the Frenchman Alfred Fronval. He was test pilot at Morane-Saulnier and flew a modified MoS.30bis. He made numerous breathtaking acrobatic flights. He had painted his last name on the wings and named the name ‘Bijou’ on the fuselage. With tears in their eyes the Dutch said farewell to the popular pilot once he had to return to France.

During the ELTA special days were organised such as the Italian and French Day (but no British!), each Thursday evening there were night flights, there was an ‘Elite Day’ and two air races were organised: An air circuit race above the Netherlands and the ‘Nederlansche Stervlucht’ (the Dutch Star Flight, a circuit flight in the shape of a star) for Dutch military aircraft (Spyker V.2 and Rumpler C VIII). An air race for flying-boats and seaplanes was organised, but cancelled after the seaplane accident of the Dutch naval Lieutenant J Heckman.

At some occasions an increased admission fee was imposed. That was the case when for example Queen Wilhelmina and Prince Hendrik visited the ELTA. Also the Queen-mother Emma visited the exhibition. Among the most prominent foreign guests were General Sir Fred J L Sykes, who arrived in style: A flight of five Felixstowe F.5As. By train came the conqueror of the Atlantic Ocean: Captain Sir John Alcock. Ten of thousands were waiting for him at the Central Station of Amsterdam. He was overwhelmed.

Numerous pages of this article could be filled with stories, but we would like to mention one of them: During one of the first official diners straight flights broke out between the officers and the serving personnel. Latter had been drinking the remains out of the bottles of champagne and wine. Dutch military police made an end to the fights.

But as mentioned at the top, the ELTA made a lasting impression at each visitor and certainly deserves its place in Dutch aviation history. The ‘Vereeniging Eerste Luchtverkeer Tentoonstellin Amsterdam’ could be disolved in March 1920. The aim had been achieved: The Dutch were air-minded again.

A book with the title ‘ELTA – The First Aviation Exhibition Amsterdam, 1919’ has been written by Rob J M Mulder. It describes in detail the ELTA, what happened day-by 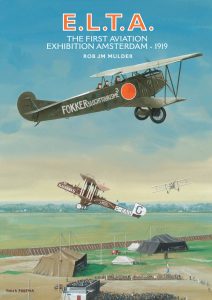 -day, which aircraft and pilots were present, and what impact the exhibition had on the development of civil aviation in the Netherlands.

For purchasing the book go to webshop

Order and payment by PayPal via the www.europeanairlines.no – webshop (credit cards accepted!)