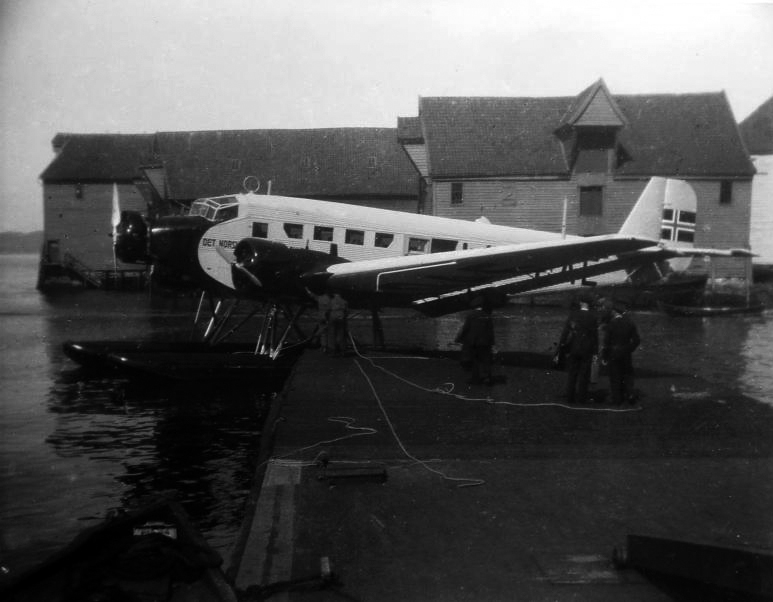 It was Rudolf Olsen, who took the initiative to start up a national airline. DNL was formed in 1933 and after the company received its license (April 1935) it could start to build up the organization and buy aircraft. The first seaplane delivered was a Junkers W 34hi, LN-DAB, which was eventually christened “Ternen” (named after the seagull in the logo of the company Fred. Olsen. The seagull plays with its wings in flight captured in a ring. Over seagull a dot was added), but already a week later the next seaplane arrived in Oslo.

On 4 June 1935 Captain Riiser-Larsen, Bernt Balchen and chief engineer in the DNL Brandt travelled from Horten to Travemünde to bring home the company’s new pride: a Junkers Ju 52/3m-See. It had been named “Havørn” (Sea Eagle and registered as LN-DAE). The next day she was transferred by the German Lufthansa-pilot Fritz Palm. The plane used 2 hours and 50 minutes from Travemünde to Oslo, where she landed at Gressholmen. Already at 15.00 o’clock “Havørn” arrived over the Oslo Fjord. It had started in bad weather, but when approaching Oslo the weather cleared up. DNLs owner, Consul General Rudolf Olsen, the German Consul Müller, ship owner Thomas Olsen, journalists and others found their way to Gressholmen to welcome the plane to Oslo. Besides Riiser-Larsen, Balchen, Brandt also Captain Lieutenant Hans Schiller, the pilot Fritz Palm, Theodor Sager (wireless operator) and Ernst Rebentrost (mechanic) disembarked from the seaplane. For an inspection of the aircraft Captain Johan Høver and Sven Brun arrived in a Marinens Flyvebaatfabrikk MF.11 “310” from Horten. He was to certify the aircraft.
Fritz Palm was the first pilot on the coastal route from Oslo to Bergen, which was officially opened on 10 June. By his side sat Finn Lambrechts. Several Norwegians were trained during the summer and winter, among them Erik Storm and Helge Dahl.

Friday the June 7, DNL invited journalists to the headquarters in Tollbudgaten where there was a ticket office run by passenger manager Heide. That day the pilots received new uniforms and the presenting them was Lieutenant Erik Storm.

In the meantime, the “Havørn” made several tours. The first airline ticket of DNL was printed on the name of the country’s Prime Minister John. Nygaardsvold. On Friday the 7th he went aboard the “Havørn” with parliament members Nordlie, Olsen-Hagen and his wife, Sven Nielsen, Mr. Førre, Mr. Vinje, the singer Th. Andresen, Lieutenant Commander Hans Schiller, Captain Riiser-Larsen, Bernt Balchen, Lieutenant Finn Lambrechts and some others. The trip went directly from Oslo to Stavanger and on Saturday they returned to Oslo.

Tuesday, June 11 “Havørn” inaugurated from Gressholmen for her first trip to Bergen. “With the inauguration of the coastal route an important and large part of Norway has been moved closer to other countries. The “Coastal Flying Steamer” brings a breath from the outside world, creating togetherness“- This is how the famous Norwegian journalist Odd Arnesen described the importance of this route. The flight went from Oslo to Moss (the only city where the city authorities were present), Arendal, Kristiansand, Stavanger, Haugesund and then to Bergen.

Odd Arnesen writes about life on board: “The pilot – the man with the magic hands – has his hands full – just like a captain on a ship. The wireless operator is dealing with their strange signs and deeds. Captain Riiser-Larsen joined on the first trip and also lieutenant Lambrechts, who will become the “Havørns” pilot in the future. There are countless things to arrange – the correct mail bags to be delivered at the right places. And it is not so few of them on each trip – 35 bags today – some fairly small and modest, others well filled. From “Havørns” basement (the stow-away in the seaplane’s bottom) is pick up by Lambrechts – he is the air cargo man.”
“… The cabin is like an entire train compartment. Each passenger has a single single seat at the window. Above each window is a small air valve that provides good, fresh air to those who think they need it. The seats are made of leather and are adjustable, so one can take a good nap in the semi-recumbent position”.

The route to Bergen was now inaugurated and in the summer of 1935 Fritz Palm virtually completed all the flights. For comparison: The kilometers flown every day was 1,300 km (Oslo – Bergen – Oslo)! People had enough time in those days!