By: Henri Kaper
For: www.europeanairlines.no

Introduction by Rob Mulder, webmaster: The BAT F.K.26 Commercial is the world’s first aircraft sepcifically designed for commercial aviation. Henri Kaper wrote an article for the webiste of the Koolhoven Aeroplane Foundation and we would like to let as many as possible get to know about this achievment. With the permission of Henri Kaper we have published the article on our website as well.

When the end of World War I was in sight, aircraft builders saw their military orders being cancelled and the interest for civil aviation as a new market grew. There were high expectations of how this modern means of transport would develop.  In the first period after the war, commercial aviation started with the use of dumped military aircraft, scouts and bombers with the necessary modifications. These aircraft however, were far from comfortable. Passengers were placed in open cockpits, dressed up in thick suits and flying helmets as the only protection against the elements.

Frederick Koolhoven, at the time running the factory of the British Aerial Transport Company, had realized that with such aircraft, traveling by air would be no competition for the comfort of trains and ships. He chose to create an aircraft especially for the transport of passengers. The first day after the armistice was signed (November 11, 1918) he started working at the drawings of the BAT F.K.26.

It was for the first time in history, an aircraft was specifically designed for commercial aviation. Frederick Koolhoven had thought about what was needed and came up with a new concept: a comfortable cabin located near the centre point of gravity, fully enclosed by the fuselage and the cockpit placed behind it. The F.K.26 could take four passengers; large numbers of passengers were not to be expected in those days.

The prototype, c/n. 29 / K-102 / G-EAAI, made its first flight from Hendon Airfield in April 1919. It was flown by the illustrious major Christopher Draper who was very content with the F.K.26’s flight characteristics.
The F.K.26 had one disadvantage. The cabin door had been kept very small out of fear that a larger entrance would have weakened the construction of the fuselage. 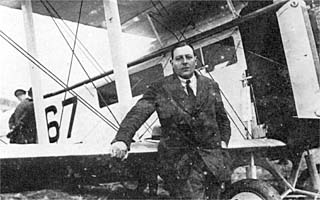 No orders were placed for the F.K.26. Nevertheless it was decided to produce three more F.K.26, c/n. 30 to 32, registrations K-167 / G-EAHN, G-EANI and G-EAPK. These aircraft were registered at the name of BAT and mainly used for charter flights in England and to Europe.

With major Christopher Draper as the pilot and Frederick Koolhoven as one of the passengers, the second F.K.26, K-167 / G-EAHN, was flown to Amsterdam to be demonstrated at the ELTA, the first Dutch aviation exhibition of August 1, 1919.

The ELTA meant the start of the airline COBOR, a cooperation between Frederick Koolhoven and the Dutch lieutenant L. Coblijn. COBOR started a weekly service Londen – Amsterdam (airfield Hounslow – airfield Soesterberg) at September 18, 1919. Unfortunately, the F.K.26 aircraft were claimed at unpredictable times, by the English Air Ministry for military transport. Because of this and the winter break after late October, this airline was forced out of business.

Despite its good performance, the F.K.26 did not become a commercial success. Airline companies preferred making a choice out of the many cheap offers of dumped military aircraft and convert them for passenger transport, rather than investing in new aircraft.

Of the four F.K.26 produced, only one had been sold. The G-EAPK bought in 1920 by Instone Airline, flew a regular service between Croydon and Paris until July 1922.

In 1937 the prototype of the F.K.26 was found back at Ogilvy Aviation, a trader in second hand aircraft and parts. Frederick Koolhoven brought the aircraft to his factory in The Netherlands, had it restored and donated it to the Dutch Aviation Museum at airport Schiphol in 1938.
After the invasion in 1940, all aircraft and parts had to be handed over to the Germans who either re-used or destroyed the material. About ten aircraft from Schiphol, including the F.K.26 prototype, were loaded on flat deck boats to be transported to the Fokker factory in the north of Amsterdam. The boats were hidden in the polder where their cargo was safe for the RAF ground attacks, but not for a group of locals who decided not to let ‘them’ have it. By night, the F.K.26 prototype has been pushed overboard, along with the other aircraft.
Until today, this historical aircraft lies in its grave, deep in the soil of a Dutch polder. 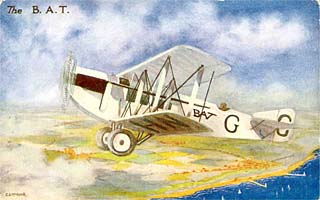 About the statement and other first airliners
by Henri Kaper

When you use the words “world’s first” there will be people who do not agree. Just like the flight of the Wright Brothers, as “the world’s first motorized flight”, is still being questioned because before this famous occasion there were the short flights made by Richard Pearse and Gustav Weißkopf. Some others believe it is Clément Ader who should be honored. Today the Wright Brothers are generally accepted as the world’s first because their flight was regarded as true, controlled flight. (Another reason was that there was no convincing proof for the earlier claims.)
In the same way the question of which aircraft was the world’s first airliner is not a matter of plain historical dates, it also depends on the definition of “airliner”.

Frederick Koolhoven was not the first to foresee passenger transport by air. From the beginning of aviation people had fantastic visions of future possibilities and a few made first efforts to bring them into practice. Like Albessard who built a tandem monoplane with a passenger cabin in 1912. He gave up on the aircraft after unsuccessful tests which were performed with only the pilot aboard. 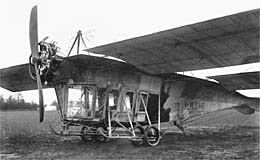 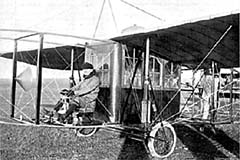 At the end of 1911, the famous Louis Blériot had also built a cabin aircraft for 4 passengers and a pilot outside. This Blériot XXIV ‘Limousin’ was a special build for one Henri Deutsch de la Meurthe, so it was probably meant for personal use.

There have been a few more aircraft like these, built for several reasons. Aircraft were still a bit of a ‘circus act’ and taking more people up in the air was already quite a feat. A few of these first passenger aircraft were solely build for these record attempts. Their creators may have had this vision of transportation by air, but it was too early for commercial aviation. These first passenger aircraft were a sign of things to come, but no airliners yet. Aviation first needed the technical development made in World War I.

However there has been one successful scheduled service before World War I. The Tampa-St.Petersburg line starting at January 1, 1914, was the world’s first airline. The aircraft used for this service was a flying boat, the Benoist Type XIV, which suited the plan because it had an extra seat next to the pilot’s. Some people came to think of this aircraft as the “world’s first airliner”, but in this case the airline is the historical subject, not the aircraft. Besides, the Type XIV was not the first of its kind, so how about its predecessors? The Benoist Type XIV is best described as an aircraft for ‘general aviation’. It was the first aircraft that has been used for an airline… not an airliner.

The “airliner” is a specific type of aircraft, designed for the use of airlines and which concept takes comfort and economy in account. Therefore other types of aircraft that have been used for airlines, be it general aviation aircraft or converted military aircraft, are no true airliners. (If some Ford T-model would have been used for the first paid fares by road, it still wouldn’t be a bus.)
It’s the intention with which the aircraft was designed and built that matters… was the design originally meant for the commercial transport of passengers?

The Sikorsky ‘Le Grand’ from 1913, the world’s first four-engined aircraft, is occasionally mentioned as the world’s first passenger plane. It had a passenger cabin and passengers have been taken on demonstration flights, but that’s were it ends. The ‘Le Grand’ was an experimental aircraft, built to show that huge aircraft like this could be flown. Although it had proven the possibility of passenger transport, it was never meant to be an airliner, which is illustrated by the fact that the new expertise was used to build large bombers. 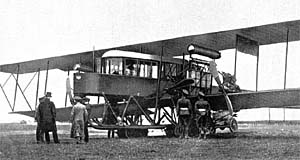 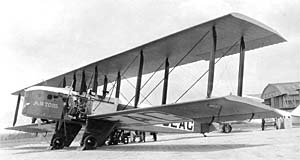 In the last days of World War I the Farman company built the prototype for what should have been the ‘Goliath’ bomber, was it not that the war ended. The design was converted to a civil version which is successfully flown by several airlines. Still, the Farman F.60 ‘Goliath’ was a bomber by origin. 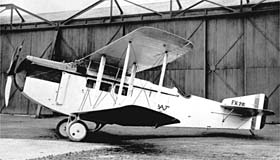 .K.26, was completed and first flown. It was the first aircraft that was specifically designed for commercial aviation from the start. To my opinion this is a sound and objective definition for “world’s first airliner”.

Before World War II the BAT F.K.26 was widely regarded as the first airliner, but then, when the history of the Koolhoven company became ignored and forgotten, the BAT F.K.26 became forgotten as well. (Historical matters need spokesmen or they will be forgotten.) So it happened that two more aircraft are claimed to be the “world’s first airliner”.

In the same year Prof. Hugo Junkers, pioneer in metal aircraft, constructed his Junkers F 13. The F 13 had a cabin for four passengers, a fifth passenger could be seated next to the pilot. It was the first all metal airliner, but not the “world’s first airliner”. The Junkers F 13 was completed and first flown in June 1919… two months later than the BAT F.K.26.
Yet, it must be said that the Junkers F 13 was really ahead of his time and successful for years. Some F 13’s have flown until the end of the twenties. 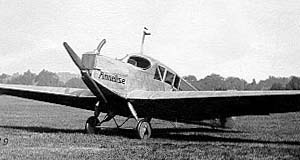 In the United States the remarkable Alfred Lawson had his vision of mass transportation by air and assigned Vincent Burnelli to build the aircraft that would be the beginning of it all. The ‘Lawson Airliner’ was a big aircraft with eighteen seats, which had its first flight at August 19, 1919… four months later than the BAT F.K.26.
Shortly after Alfred Lawson, who had a great feeling for publicity, took his aircraft on a city-to-city tour and presented it as “World’s First Airliner” and “World’s Largest Airplane”. He was not aware, but wouldn’t have cared either, that both claims were not true. Other than the BAT F.K.26 and the Junkers F 13, the ‘Lawson Airliner’ has never been in service with an airline. 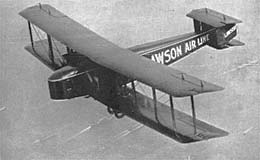 The Fokker F.II, the first of the very successful Fokker airliners, made its first flight as late as October 1919. The F.II had a cabin for four passengers and has flown in service with the KLM and the Lufthansa.
(Its predecessor, the V.44 or F.I, was built very much like a military aircraft, with open cockpits. Because the BAT F.K.26 and the Junkers F 13 had shown a better solution, the Fokker V.44 project was cancelled before completion.) 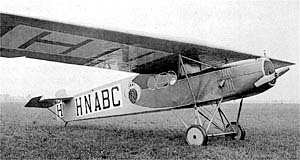 The world is a busy place. Frederick Koolhoven was not the only one to hit upon the idea, but he did manage to realize the first true airliner in history.