One of the most important airliners from the twenties and thirties of the previous century was the all-metal Junkers J 13. The aircraft has had several designations:

The suffixes were not introduced until June 1927. The type is, however, generally known as the Junkers F 13 and this is how we will call it as well. The type saw only limited service in Norway. It successor the Junkers Ju-52/3m saw much greater use until long after the Second World War, but that is a different story. 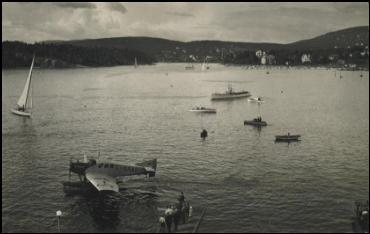 Jfa had reserved two Junkers F 13W for the scheduled Oslo – Göteborg seaplane service, but these were not delivered to Norway. Although AB Aerotransport was granted a Swedish subsidy for a route to Oslo, it could not open the air service, as Norsk Aerotransport did not manage to get started.

In July 1926 a second attempt was made to form an airline company in Norway under the name of Norsk Aerotransport. The foundation of the company was announced in the Norwegian newspapers now under the leadership of Captain Christian Doxrud, the ship owner H Holmsen and the lawyer Oluf Aall. Shares could be signed at the office of AS Norsk Aerotransport.  To promote the selling of the stocks the company decided to rent a Junkers F 13W for joy-ride flights. Norsk Aerotransport chartered from AB Aerotransport (Sweden) the Junkers F 13W, S-AAAB with the Swedish pilot Ernst Roll together with a German and Swedish engineer. It arrived at Oslo on August 20 and moored at the well-known Kongen Restaurant (King’s Restaurant). Joy-ride flights were offered at 20 Norwegian Kroner for 15 minutes and up to the end of August 105 flights with 105 passengers were made. The aircraft extended its stay and made until mid-September another 200 flights with 1,000 passengers.  It returned to Stockholm on September 13.

For 1927 a regular air service between Oslo and Göteborg in co-operation with AB Aerotransport was planned, as well as a service along the west coast from Trondheim to Tromsø in the north. Nothing is however heard from this company anymore.

Formed in October 1928 by the pilot Christian Hellesen and the consul J H Holm. The company purchased the Junkers F 13W, N-44 and used it for joy-ride flights during the centennial celebrations of Trondheim. The company planned to open an air service Trondheim – Tromsø and Hellesen made together with John Strandrud a return flight. The company was however dissolved in November 1930.

Norway’s most famous female pilot was Gidsken Jakobsen from Narvik. She obtained her pilots licence at Aero-Materiell’s Flying School in Stockholm, Sweden. She purchased a Finnish built Saaski II and imported it to Norway, where it was registered as N-40 Måsen (Seagull).  Local joy-ride flights were made with the aircraft, but it was not until 1932 that she formed the first airline company of Northern Norway: Nord-Norges Aero AS. In July 1932 the company bought the Junkers F13W, N-44 from Nordenfjeldske Luftruter AS and transferred it from Trondheim to Narvik. John Strandrud joined the company as well and during the summer of 1932 they made joy-ride flights in Hammerfest, Honningsvåg and Lakselv. On June 27, 1934 the Junkers F 13W, N-44 crashed and was in April 1935 replaced by the Junkers K 16bi, LN-ABH (ex D 654 Kreuznach). Later Nord-Norges Aero AS tried to apply for the general concession in Norway, but this went to Det Norske Luftfartsselskap, Fred. Olsen & Bergenske AS. Subsequently the company was dissolved.

The picture of the Junkers F13W, S-AAAB in the harbour of Oslo (See: AS Norsk Aerotransport) was kindly supplied by Odd Arnestad.