Many believe Albert Plesman, on 7 October 1919, was the founder of the airline KLM Royal Dutch Airlines. THIS IS NOT CORRECT. You can read here the correct story. More about this story can be found in the book “The Fokker Fours”, published by European Airlines Publishing House.

In mid-1918, the KNVvL took the initiative to form a Commissie voor Luchtvaartverkeer (a commission for ‘aviation traffic’) that produced a report pleading for airmail services. A private company supported by the State should operate these. After the Armistice of 11 November 1918, the economic optimism grew in the Netherlands as well. The commission members were granted permission to leave for the United Kingdom to check out the British plans for an airmail service between England and India. The Netherlands could perhaps establish a branch line from Amsterdam or Den Haag (The Hague) to Brussels and Paris. The commission offered its report on 1 June 1919 to A. A. H. W. König, the Minister van Waterstaat, the minister of water affairs, who was responsible for civil aviation. In Belgium, there was also interest in an air service between the Netherlands, Belgium and France.

Already in February 1919, A. S. Baxendale of the British airline company Aircraft Transport & Travel and the Minister of Waterstaat met to discuss aviation matters. After this visit, on 15 February, a meeting at the Rotterdamsche Bankvereeniging (Rotterdam Bank Association) was held to discuss an air service, which was followed by a meeting at the Ministerie van Binnenlandsche Zaken (Ministry of Interior), where it was decided to send out a government commission to determine the position of the Netherlands and the Netherlands East Indies (now Indonesia, at the time a colony of the Netherlands). On 5 June, owner of the shipping company Wm H. Müller & Co. gave his Advisory Commission details about an air service, and handed over a report to Dr. Hendrik Colijn. On 18 June, a new meeting took place and on the agenda was the possible formation of a Dutch airline. The Advisory Commission informed on 21 June that it was decided to form an airline with a capital of hfl. 500,000 (hfl.=Dutch Guilders). The name of the company was to be Nederlandsche en Koloniale Luchtverkeer Maatschappij (Dutch and Colonial Airline Ltd). It requested the prefix Koninklijke (Royal). The stock capital was hfl. 771,000 paid in by four companies, later increased by new subscribers to hfl. 1,200,000.

On 17 September 1919, Albert Plesman was informed that he was to become the director of the company. On 7 October 1919, a party met at the notary’s office of meester Stoop to confirm the formation of the ‘NV Koninklijke Luchtvaart Maatschappij voor Nederland en Koloniën – KLM’ (nowadays generally known by the English expression KLM Royal Dutch Airlines). Exceptionally, the prefix Koninklijk (Royal) was already awarded by H. R. H. Queen Wilhelmina in September 1919. The seat of the company would be at The Hague. It was not until 30 June 1920 that the shareholders of KLM approved the Articles of Association. Among the stock holders belonged the Nederlandsche Handels Maatschappij (Dutch Trading Co.), the Administratiekantoor Unitas (Administration Office Unitas), the Bataafsche Petroleum Maatschappij (the Batavian Petrol Co., the predecessor of Shell), de Wm. H. Müller & Co., the bank Lippmann Rosenthal & Co., the Rotterdamsche Bankvereeniging (Rotterdam’s Bank Association), the Twentsche Bank (Bank of the County of Twente), and the Nederlandsch-Indische Handelsbank (Netherlands Indies Trade Bank).

After the formation of the company, KLM needed an airfield and aircraft to fly with. The field Maaldrift near Wassenaar (near The Hague) was chosen and a hangar built. The British pilots, however, found this airfield not safe at all, and in May 1920, Albert Plesman requested to use Schiphol instead of Maaldrift. The Government gave permission. KLM would nevertheless keep its head office in The Hague and not at Amsterdam-Schiphol. 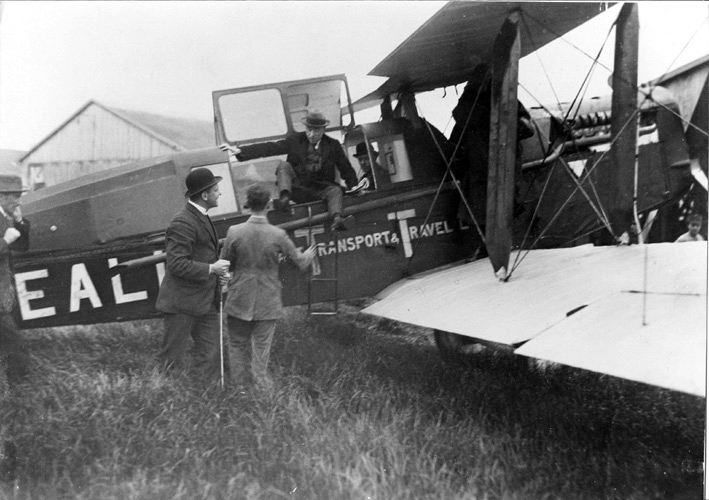 When spring arrived, KLM started up its services. It signed an agreement with the British airline Air Transport & Travel (AT&T), where each airline would be responsible for one leg. AT&T would fly and pay for costs for the service London-Amsterdam, while KLM would fly and pay for the costs for the service Amsterdam-London. In addition, the Postmaster General awarded the English contract also to Handley Page Transport Ltd. for the route London-Amsterdam and as a consequence KLM also signed a contract with Handley Page. On 17 May 1920, AT&T inaugurated its service, and the Airco D.H.16, registered G-EALU, arrived at 1240 after a flight from London-Cricklewood to Schiphol. The pilot H. Shaw and his passengers E. O’Brien (of the Exchange Telegraph Co) and H. Rhodes (of the newspaper Evening Standard) disembarked, and could hand over a letter from the Mayor of London to the Mayor of Amsterdam. The next day, it was KLMs turn to take off, and 18 May 1920 can, therefore, be regarded as the day where the first official KLM-flight from Amsterdam to London was operated. The route was flown every second day (except Sundays), with the frequency increasing to daily on 28 June 1920. All services were flown with chartered British aircraft. Until 5 July, KLM and AT&T transported only passengers and freight, but from that day they carried mail as well. One week later (12 July) the frequency of the service was again increased, now to twice daily. One flight was leaving at 1120, a second at 1500. Mail was not carried on this second flight. Finally, on 26 July, KLM added the city of Rotterdam (airport Waalhaven) to its London service. The aircraft used on the air route were the Airco D.H.4A, Airco D.H.9B, Airco D.H.16, Airco D.H.18. From Handley Page Transport Ltd, KLM rented aircraft as well: Airco D.H.4A, Handley Page O/7, Handley Page O/10 and Handley Page O/11. A total of 487 flights were made. On 18 May, the day of the opening of the KLM service, Anthony Fokker send his Fokker F.II into the air. In Fokker’s German aircraft factory in Schwerin, the company produced the prototype V.45, which made its first flight there as early as October 1919. The aircraft was illegally flown to the Netherlands in March 1920, and further aircraft were built at the factory in Schwerin, before the production was transferred to Veere, in the southwest of the Netherlands. A few months later, KLM ordered two examples of the F.II for delivery later that year.

An extension of the KLM-network was initiated in the autumn of 1920. In co-operation with other IATA-airlines, KLM inaugurated on 1 September 1920, the service Amsterdam-Bremen-Hamburg-Copenhagen. The aircraft and crews were hired from the Deutsche Luft-Reederei GmbH. Aircraft operated were all German-built: AEG J II, AEG K, LVG C V, LVG C VI, Rumpler C IV, Sablatnig N I and Sablatnig P III. Some of these aircraft came from the Lloyd Luftverkehr Sablatnig. On 15 September, the frequency on the service Amsterdam-Bremen-Hamburg-Copenhagen increased from three times a week to daily. The summer season ended on 27 September, and although KLM continued flying, the company had to cease all services on 31 October. Results for 1920 were not bad at all: 346 passengers used the regular services of KLM. The aircraft flew 233,600km (145,152 miles) and carried 2,962kg (6,530 lbs.) of mail and 21,963kg (48,420 lbs.) of cargo and luggage.

Drawing of the Fokker F.II, H-NABD, that was one of two F.IIs delivered to KLM in 1920.

On 30 September, a trial flight with the Fokker F.II, H-NABD took place, flying from Schiphol to London-Croydon and, on 2 October, to London-Cricklewood. The aircraft was flown by British Captain W. G. R. Hinchliffe, co-pilot Bernard de Waal (NVNV) and mechanic Simon Elleman. The only (non-paying) passenger in the cabin was the notorious Dutch aviation journalist Henri Hegener. At the end of 1920, the foundation of KLM was laid, and in the next ten years the company would steadily grow, although its financial situation was not always at its best. During the 1920s and early 1930s, KLM would operate the Fokker F.III, F.VII (both single-engined and three-engined versions), F.VIII, F.IX, F.XII and F.XVIII. At the end of the 1920s the search for an even bigger and more comfortable aircraft would start.

(Text from the book “The Fokker Fours”, by Rob J. M. Mulder)