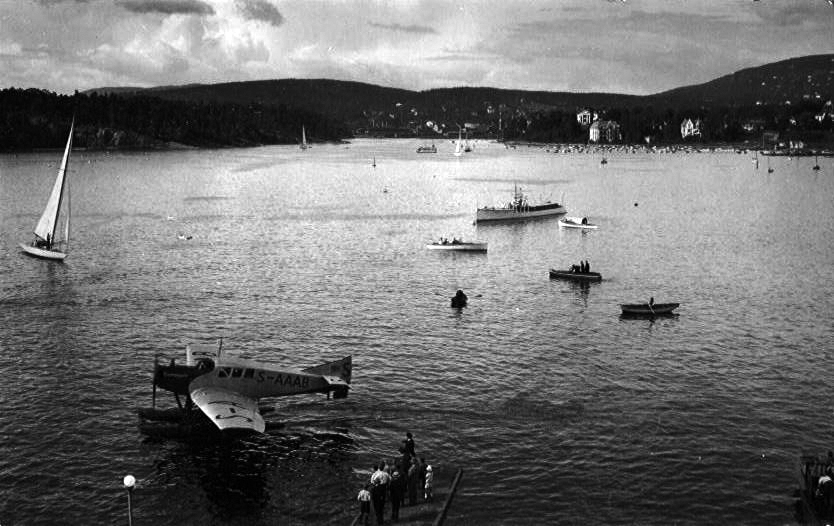 The Swedish-registered Junkers F 13, S-AAAB in the harbour of Oslo. it made numerous joyrides.

But Capt. Doxrud did not manage to start up until 1926. His first attempt was the company Norsk Lufttrafikkselskap AS, founded on March 6, 1926 with a stock-capital of 50,000 Norwegian Kroner. The plan was to start up with chartered Junkers F 13s from Sweden the regular domestic air service Trondheim – Tromsø. The company did not start up. The name resembles a lot the words Aero (Luft) Transport (Trafikk), so this might well have been the working name for the company.

But on 1 July 1926 AB Aerotrans­port however started up a regular ser­vice between Göteborg, København and Malmö using Jun­kers F 13s and Junkers G 24s. That day is also the day that AS Norsk Aerotransport officially announ­ced to be formed and possible shareholders were invited to sign up. The aim of the company was ‘’..flying regular services and other flights and all other work connec­ted with flying, such as buying and selling of aircraft, etc…’’. The com­pany’s stock-capital was to be at least 12,000, with a maxi­mum of 50,000 Norwe­gian Kroner. Each share was worth NOK.100,-. The first to sign up were Capt. Christi­an Doxrud (of course), the ship owner H Holmsen and the attorney Oluf Aal. The signing up for the shares could be done between August 15 and October 15, 1926 at the company’s office at Karl Jo­hans Gate 13 in Oslo.

To promote the company Capt. Doxrud decided to charter a Jun­kers F 13 from AB Aerotrans­port for joy ride flights in Oslo. The aircraft charte­red was equipped with floats and bore the regist­ration S-AAAB (c/n 714). The Swedish pilot Ernst Roll flew it. It arrived at Oslo on 20 Au­gust and moored at the famous Oslo Res­taurant Kongen (The King). During the weekdays it was stationed here, but was moved to Strand during the week­ends, due to heavy boat-traffic around the res­taurant during the weekend. The price for a flight with the Junkers F 13 was NOK.20,- per person. During its stay in Oslo, Roll made a demonstrati­on-flight to Horten (Na­val Base). On Monday, Au­gust 23 he flew the Oslo-press and from the 24th he started to fly the Oslo-citizens. The interest of the populati­on of Oslo turned out to be enormous. The plan was to return the aircraft on August 31; and until that day 105 flights were made, carrying 500 passengers. It was decided to prolong the stay until September 12. During the week of September 5-12 the annual Norwe­gian Trade Fair was held and it was in connection with this fair that extra flights were made. A special bus-shutt­le was set up from the fairground (Akershus Fortress) to the Restaurant Kongen. The Nor­wegi­an newspaper Aften­posten even chartered the Jun­kers F 13 to pick up some photographs in Ask at the shores of the Lake Tyrifjord. The pictu­res, together with a huge article about the flight were published in the newspa­per.

When the fair closed down some two-hunderd flights had been made, carry­ing around 1000 passengers. A huge success. In an interview Capt. Doxrud said that AS Norsk Aerotransport would like to buy a Junkers F 13, but that the charte­ring of one would be within the financial reach of the com­pany. It wanted to start the regular service Oslo – Göteborg in co-operation with AB Aero­transport. The Swedish company had plans to open up a scheduled service linking Göteborg with Stockholm in connection with the service from Oslo. Furthermore Capt. Doxrud planned to start up a service between Trondheim and Tromsø – in the far north of Norway. Here he would use Norwegian mechanics. He also expressed the opinion that a service to London would be desirable, but one had to wait for better aircraft. All these plans were never realised. On Septem­ber 13 the Swedish Junkers F 13 returned to Stockholm and nothing was heard of AS Norsk Aerotransport anymo­re. It was never founded nor registered.

Read more about the attempts of Junkers Luftverkehr AG to start up airlines in Scandinavia: “JUNKERS FOR SCANDINAVIA” by Rob J. M. Mulder