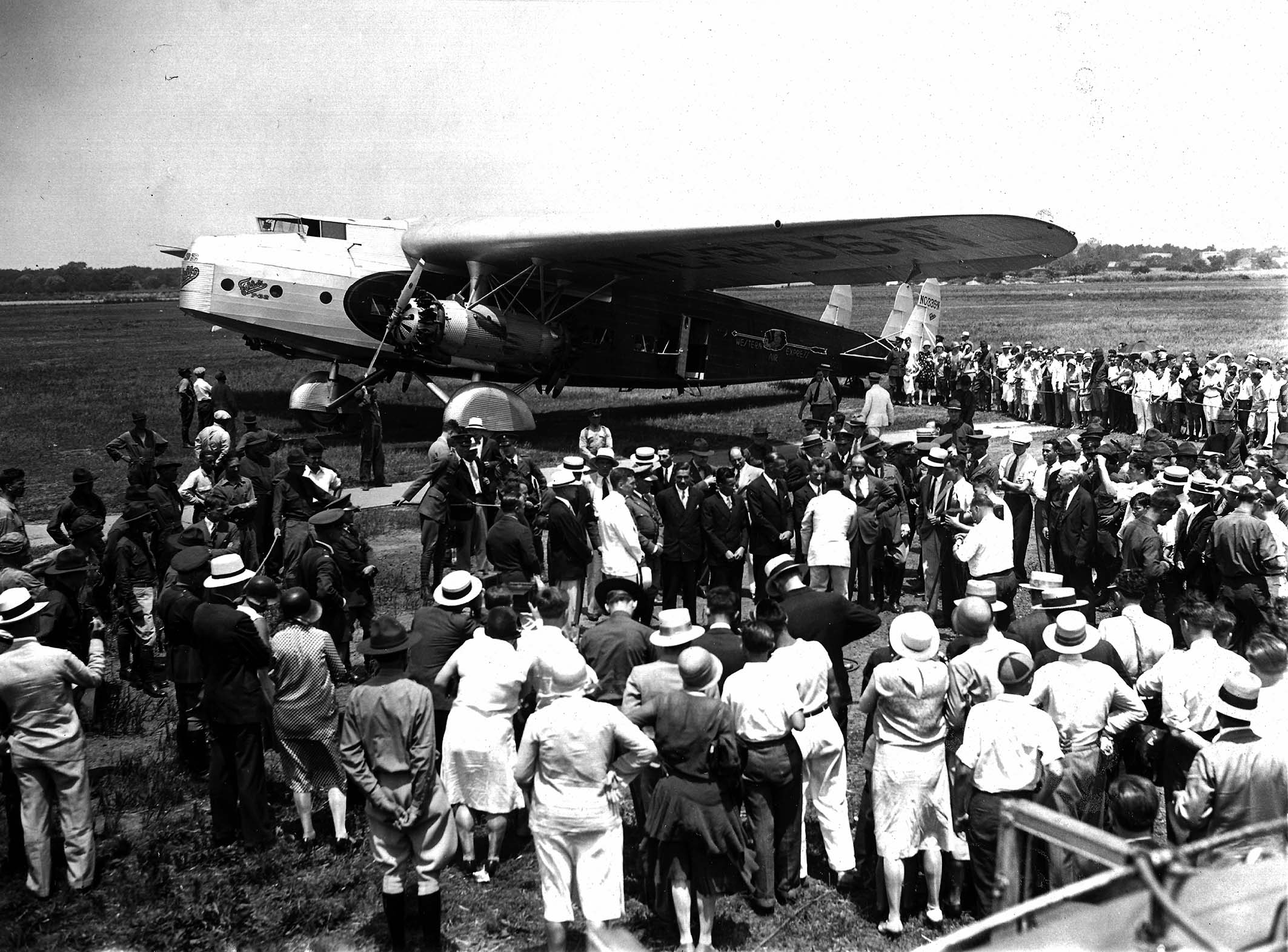 Arrival of Kingsford-Smith and his crew after the flight from Hasbrouck Heights to Washington-Bolling. (via Gert Blüm)

In 1928, Charles Edward Kingsford Smith and his crew made the first trans-Pacific flight from the United States of America to Australia. Later, he made the first non-stop crossing of the Australian mainland, the first flight between Australia and New Zealand, and the first eastward Pacific crossing from Australia to the United States. Finally, he made a flight from Australia to London in 10.5 days. All these flights were made by the Fokker F.VIIb-3m, named Southern Cross. His aircraft was overhauled at the N.V. Nederlandsche Vliegtuigenfabriek at Amsterdam-Schiphol. In June 1930, the aircraft was ready, and Kingsford Smith made a successful east-west crossing of the Atlantic Ocean from Ireland to Newfoundland in 31.5 hours. He was welcomed as a hero at New York, and of course, Anthony Fokker was proud of the achievement in one of his aircraft. On 26 June, the Fokker F-32, possibly NC335N, flew from Teterboro to Roosevelt Field and back to welcome the Southern Cross after the Atlantic flight. On 30 June, Charles Kingsford-Smith and his ocean fliers were transported in the Fokker F-32, NC335N from New York to Washington D.C. to meet President Herbert Hoover. They originally planned to fly to the capital in the Fokker F.VIIb-3m, Southern Cross, the three-engine aircraft in which they had crossed both the Atlantic and Pacific and almost ringed the world, but it was decided shortly before departure to leave the aircraft at Hasbrouck Height, in the hands of the mechanics grooming it for the flight to Oakland, California, which was to begin on 2 July. Anthony Fokker placed his Fokker F-32, NC335N, at Kingsford-Smith’s disposal.

In the morning of 30 June at 0850, the silver and crimson coloured Fokker F-32, piloted by major Victor Bertrandias and with Kingsford-Smith in the co-pilot seat, left Hasbrouck Height and flew non-stop to Bolling Field. In the cockpit was also pilot William N. DeWald and Bernt Balchen. Kingsford-Smith, his co-pilot Evert van Dijk, his navigator J. Patrick Saul, and radio operator John Stannage, were given a rousing reception by a crowd, when they landed at Bolling Field near Washington at 1112. The passengers told that the flight was uneventful, the only mishap occurring on land. The party was hurrying to the airport by motor car when a traffic policeman in Jersey City stopped them. They explained and were released. Upon arrival in Washington, they were greeted by Sir Ronald Lindsay, the English ambassador, William J. B.  Macaulay, the minister of the Irish Free State, Philip Botha, the commercial secretary at the Union of South Africa legation and Jan Herman van Roijen, the minister of the Netherlands in the USA, as well as U.S. Army and Navy officials. They were taken to the English embassy where they could refresh themselves before being received in the Blue Room at the White House by President Herbert Hoover at 1230. After a 15-minutes talk, they had lunch, where also Eddie Rickenbacker, Anthony Fokker, and Bernt Balchen joined as guest. The stay in Washington was closed off with a visit to the Senate before the guests returned to Hasbrouck Height.

In the aftermath, Kingsford Smith wrote a letter to Anthony Fokker, which was published in an advertisement in the Aero Digest, dated August 1930, and wrote: ‘When President Hoover was good enough to invite us to the White House we flew down in your latest Fokker, the F-32. And the ship flies beautifully. You have always built planes that flew magnificently. I fought against some of them during the war … and well I knew them! All of the record flights I have since made were in Fokker planes; so well justified by the safety and durability of the Southern Cross.’