The J 13 prototype (531) first flew on 25 June 1919. In the background
is an example of the single-seat Junkers J 9 fighter, military designation
Junkers D.I, which was soon registered to Junkers-Flugzeugwerk
as a commercial courier aircraft (Günther Ott)

On 25 June 2019, we celebrated the fact that it was 100 years ago, that the aircraft made its first flight! Read all about it in the special edition of the reprint of the successful book ‘Junkers F 13 – The World’s First All-Metal Airliner’. On 25 June 1919, a small six-seater aircraft lifted off from an airfield at Dessau in Eastern Germany on its first flight. Designed and built in less than six months in a devastated Germany immediately after the First World War, its birth could not have been more difficult against the strangulating imposition by the victorious Allies of a ban on German air­craft production. It had demanded of Professor Hugo Jun­kers, whose wartime designs had made little impact, creativ­ity, invention and much subterfuge against almost impossible odds to bring this first of a series of innovative designs to production. Yet, within five years, this unassuming aircraft was serving three-quarters of all air routes within Europe, and went on to play a pioneering role in the development of a fledgling air transport industry in many parts of the world.

So what set the single-engine F 13, sometimes unkindly re­ferred to as the Blechesel [tin donkey], apart from the competition in these early post-war years? It is no exaggeration to state that it scored a number of firsts. It was the first aircraft designed specifically for the carriage of passengers, in recognition of a new demand for air travel in peacetime Europe. It was the first all-metal, clean low-wing cantilever monoplane to enter service and can be regarded as the benchmark for subsequent designs by other aircraft manufacturers, which still today follow similar principles. Passengers were accommodated in an enclosed and heated cabin with four upholstered seats with seat belts, and there was provision for lighting and the carriage of baggage. There was an open two-crew cockpit for a pilot and mechanic, with provisions for dual controls on long flights. Another innovation was the installation of a trim tank under the rear of the fin, which provided adjustment to the centre of gravity through the trans­fer of fuel. The F 13 could be provided with a wheeled landing gear, floats or skis, enabling operations in all kinds of environments.

Its impact on the early development of air transport, not only in Europe but in the far-flung corners of the world, should not be underestimated, nor should it ever be forgotten. We have spent forty years piecing together its fascinating history and that of each one of the 348 aircraft produced between 1919 and 1931. The excellent Junkers ar­chive in Munich has provided the basis for this work and to this has been added information from hundreds of other sources: archives and museums in different countries, con­temporary books and magazines, and also the private col­lections of a world-wide net of aviation specialists and enthusiasts. Please consult the list of sources and literature. We are acutely aware that time marches on, making it ever more difficult to fill the gaps that remain in our knowledge, but we hope that our contribution will be a lasting tribute to a great little aircraft.

We have reprinted a limited number of books. Press this link to secure one of the 100 books reprinted! 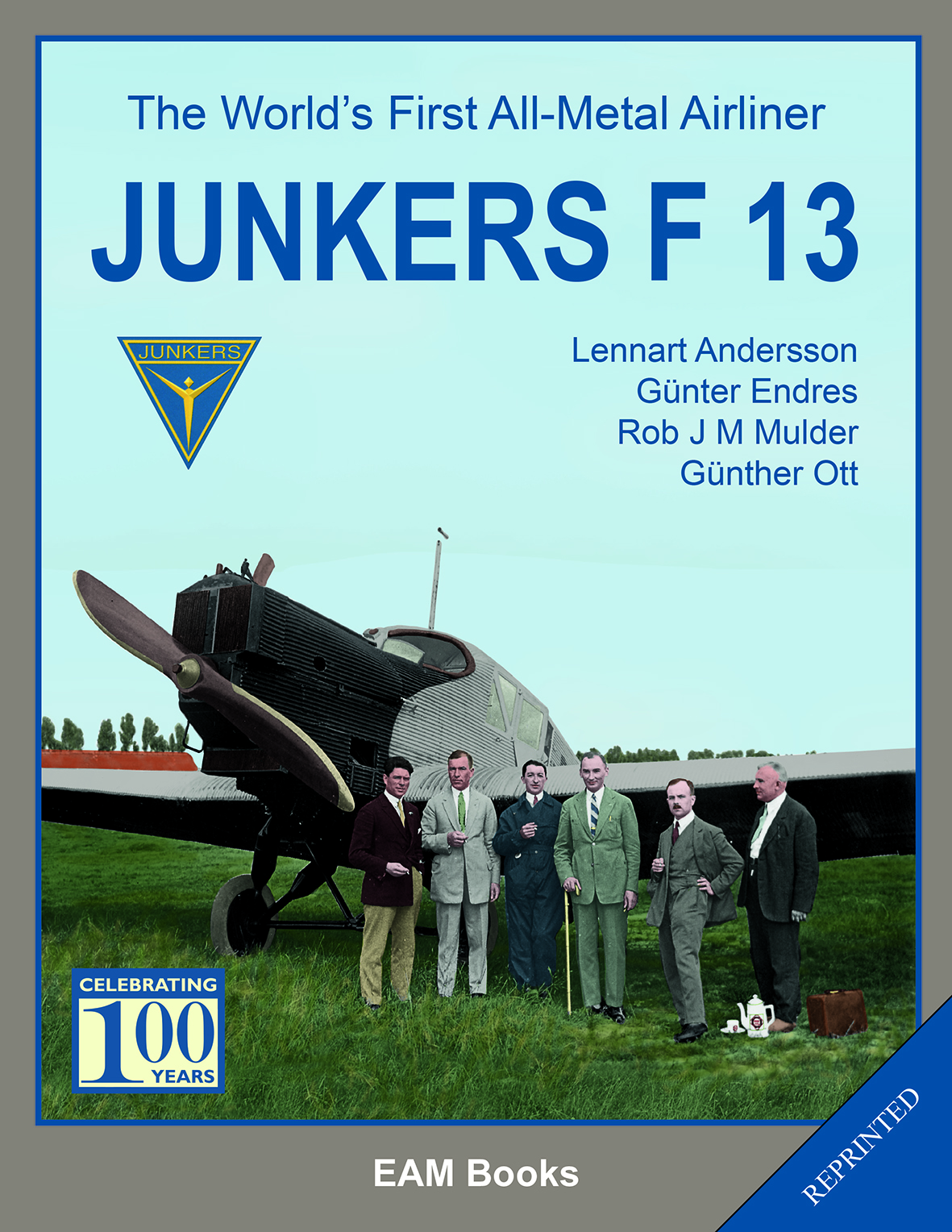 Reprint and limited edition of the classic book on the Junkers F 13.