In May 2010, Rob J M Mulder published a book about this amphibian. The below mentioned article is just a fraction from the material he has gathered. The book is available through the webshop for jst NOK 150 / Euro 19 + postage. Norwegian text, but insert with English text offered free of charge.

In the French magazine “Fana de l’Aviation” No. 204 Bernard Millot wrote about the Sikorsky S.43: “Le plus bel hydravion du monde en 1935” – the most beautiful seaplane of the world in 1935. And right he was. The S-43 was a scaled down model of the S.42 and made its first flight on June 1, 1935. It was aerodynamically cleaner than the S.42. The aircraft was powered by two 750 hp Pratt & Whitney Hornet engines and had a two-step hull that was divided into five compartments. The hull could accommodate fifteen passengers. A crew existed of two (pilot and second pilot). Biggest purchaser (with fourteen aircraft) was the American airline company Pan American Airways.

Main figures of the Sikorsky S.43 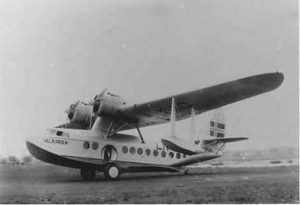 But one aircraft was delivered to the newly established Norwegian airline company Det Norske Luftfartsselskap A/S, Fred. Olsen & Bergenske. Background for the delivery was a contract signed between Pan American Airways and DNL, where both company would operate in pool an air service between the United States and Norway via Reykjavik, Iceland. The aircraft with the constructor’s number 4312 was delivered on July 29, 1936 to Norway by ship, assembled and finally registered as LN-DAG Valkyrien (The Valkyrie) on August 26, 1936. The Atlantic air service (Stavanger – Reykjavik, Iceland) was to be opened in May 1936, but a few days before the start of the operation the Americans cancelled the agreement thus leaving DNL with an aircraft it had no use for. The aircraft was put into storage in Malmö, Sweden and did not return to Oslo until spring 1937.

In December 1936, Deutsche Lufthansa AG’s director Otto Julius Merkel requested DNL if it was possible to charter the Sikorsky S.43 from DNL for trial flights over the Baltic Sea. If interested DNL could also exchange the amphibian for a German aircraft. DLH would be interested to receive the aircraft at the end of March 1937. Due to export restrictions the deal did not take place and the aircraft stayed in its winter storage in Malmö.

On March 20, 1937, DNL applied for a concession for the air service Oslo – Stockholm in connection with the company’s coastal route Stavanger – Oslo and Allied (Gandar Dower) Airways Ltd air service Newcastle – Stavanger, scheduled to open in the spring of 1937. The Oslo – Stockholm air service was scheduled to open on June 21 and operated until August 28. DNL suggested a fare of NOK.80 per person, one way and that it would use the Sikorsky S.43, LN-DAG. In Oslo the aircraft would take off from the Oslo/Gressholmen seaport and land as a landplane in Stockholm on the Bromma airfield. Here the Finnish airline company Aero O/y would continue to Helsinki, Finland. DNL tried to sell the aircraft and informed the Forsvarsdepartement (FD, the Ministry of Defence, responsible for civil aviation in Norway) the Sikorsky S.43 could be replaced by the Junkers Ju 52/3m-See if the amphibian was sold. Since the Ju 52/3m-See was a floatplane, the aircraft would like to land at Lindarängen (the seaplane airport of Stockholm) and no connection to Helsinki would thus be possible, since that aircraft left from Stockholm/Bromma. In addition to its application DNL informed in May that the Sikorsky S.43 now also was spare aircraft on the coastal route and would proceed from Stockholm to Oslo and Bergen in case the Junkers Ju 52/3m-See were out of service.

Out of its storage and finally flying!

On April 30, the aircraft was taken out of his winter storage in Malmö and DNL-pilot Bernt Balchen and Finn Lambrechts made some trial flights before flying it to Oslo. Everything worked fine and the aircraft returned into storage until May 30, when it was flown to Stavanger to be present during the opening of the Sola Airport, the first airport in Norway to have a concrete apron. Here it performed some joy ride flights before it returned to Oslo. On June 4 the aircraft made a trial flight between Oslo, Stockholm and Oslo that went fine. The flight was also made to check the emergency landing sites. For this purpose, the company wanted to use lakes and saw that most lakes were free for floating timber. The radio connection between Oslo and Stockholm was also very good and also the meteorological services were perfect. The aircraft’s navigation equipment functioned well and should secure a safe flight in and above the clouds.

DNL had been given the concession by the Norwegian Government and on June 11 the Swedish Government followed. The route could be opened with the following schedule:

But the Swedish Government (on behalf of the Swedish Railways) wanted DNL to charge SEK 95 per person and that was 15 kroner more expensive than DNL wanted. This would have major impact on the results that year.

The well-known Norwegian pilot Bernt Balchen inaugurated the air service Oslo and Stockholm and flew the aircraft safely between the two royal capitals. In July Finn Lambrechts and Helge Dahl took over the controls from Bernt Balchen. During the following month the Sikorsky S.43 made its daily flights, but the number of passengers was very disappointing. In order to improve the results on the route, DNL requested to the Swedish Government to allow a lower fare in order to increase the number of passengers. To make a comparison the cost per passenger kilometre on the air service Oslo – København was NOK 0,20, while between Oslo and Stockholm the figure was NOK 0.25. Since the request was denied, the Board of Directors decided on July 27, 1937 to discontinue the air service as from Saturday, July 31. The disappointing results were: 272 passengers, 26 kg goods, 569 kg airmail, 29,463 km flown on approx. 70 flights.

But when DNL presented in September 1937 its plans for 1938, the Oslo – Stockholm air service was put on the list again with a departure from Oslo in the morning and a return flight in the afternoon. The service was regarded as important especially when the land airport Fornebo was finished in 1939. It was planned to operate it between May 2 and October 1: 132 days of operations with a Junkers Ju 52/3m (or a Sikorsky S.43). In Oslo the Junkers seaplane would continue to Bergen. DNL mentioned in the plans presented to the FD that the fare for the Oslo – Stockholm service should be NOK 80 per person and not SEK 95 otherwise the passengers will not use the air service. But the Sikorsky S.43 would not fly passengers for DNL anymore.

In September 1938 the Sikorsky S-43, LN-DAG, was sold to the French airline company Aéromaritime. DNL had before the sale of the aircraft looked into the possibility to use the aircraft on the Tromsø – Svalbard (Spitzbergen) service, but considered it not economically. During 1937 and 1938 DNL offered the aircraft on lease to ČLS (Czechoslovakia), PLL Lot (Poland) and Swissair (Switzerland), but also without success.

The Compagnie des Chargeurs Réunis took in 1929 the initiative to form a company with the symbolic name Société pour le développement de l’aviation commerciale en France (meaning Company for the development of commercial aviation in France). Its main objective was to study the possibilities to start up air services across the Atlantic in connection with its shipping routes. It also investigated routes along the African coast south of Dakar. On March 28, 1935 the Compagnie des Chargeurs Réunis founded the airline company Aéromaritime with the objective of providing an air service along French West and Equatorial Africa. The company’s first aircraft were not flying boats, but two Caudron Pélican. These aircraft opened on July 7, 1935 the air route Cotonou – Niamey and were supplemented by two Caudron Goélands. Aéromaritime took also delivery of a Sikorsky S.38 (F-AOUC). The pilots Pivot and Herviou, assisted by radio-operator Geoffrey and Manuel and engineer Mistrot made between March 14 and 29, 1936 the first reconnaissance flight between Dakar, Cotonou and Pointe Noire. The S.38 was used because the S.43 was not yet ready for delivery from the factory at Stratford (Connecticut, USA). But in the late spring and summer of 1936 the three aircraft could be delivered:

It may well be noted that the Norwegian Sikorsky was the next to be delivered and carried the constructor’s number 4312! The reason for ordering the Sikorsky S.43 was that the French aviation industry had not produced an amphibian. The S.43 was one of the few that existed.

With the Sikorsky S.43, Aéromaritime starts to operate the following airmail and freight services:

September 1937       In addition to airmail and freight, passengers are now allowed as well.

Air France SA established in Dakar connection to France. In January 1939 Aéromaritime became full-member of the International Air Traffic Association – IATA and by then five Sikorsky S.43s were operated. The fourth ordered aircraft was delivered from the New York, USA to Dakar on January 21, 1938 and registered in France as F-AQHY. The last aircraft delivered came from the Norwegian airline company Det Norske Luftfartsselskap A/S, Fred. Olsen & Bergenske.

On June 10, a Norwegian crew flew the aircraft from Oslo to Amsterdam/Schiphol, where it underwent a major overhaul at the workshop of the Royal Dutch Airline Company KLM. The work was finished on September 2. KLM had revised the engines and repaired the hull for minor damages. The total cost for the overhaul was 11,000 Dutch Guilders that was deducted from the selling price. DNL had managed to sell the aircraft for USD 90,000, which was USD 45,000 cheaper than a new aircraft. Around September 2 the aircraft could be transferred to France and on September 13, the Bureau Veritas confirmed that it had received the flight logs for the aircraft and its engines (# 2635 and # 2634 as well as spare engine # 2637). The total flying time until then was just 197 hours.

The aircraft was delivered to Le Bourget on September 14 and was given the French Certificat de Navigabilité on September 27. On October 19 it was registered as F-AREX on the name of the Compagnie des Chargeurs Réunis and flown via Marseille to Dakar, where it made in February 1939 made the first flight on the Dakar – Abidjan service. On April 3, 1940 the Sikorsky S.43, F-AREX made the inaugural flight along the route Abidjan – Lagos. During the Second World War it was involved in a minor accident, but it stayed in service with Aéromaritime until it was cancelled on May 29, 1946. The last recorded number of flying-hours was when it visited the Bureau Veritas in Abidjan on December 16, 1943: 1,691 flying-hours.

I would like to thank my French friends Régis Biaux, Bruno Parmentier and Robert Espérou for information on the use of the Sikorsky S.43 by Aéromaritime.