During the twenties and thirties of the last century it happened regularly that foreign pilots came in their aircraft to Norway for a visit. Many of these visits are until recently been unknown to most of us, but as more archives are visited more details emerge.

This story started when I found a picture in the papers of the Norwegian Captain Johan Høver. The picture showed a British registered aircraft on floats with a text on the back: “Puss Moth – Capt Master of Semphill – who arrived this morning”. Captain Høver had at a later date added: “23/8-35 – flew with him from Oslo – JH”. Via Malcolm Fillmore in Air Britain, we found out that this plane was used by the famous British pilot The Master of Sempill.

Lieutenant-Colonel The Master of Sempill (The Honorable William Francis Forbes-Sempill) was born on 24 September 1893 in Devonport (UK). He was a pilot in the Royal Naval Air Service, Royal Flying Corps and later Royal Air Force. In 1918 he was a member of a commission to the U.S.A. and between June 1921 and February 1922 he found himself working for the RAF at the Naval Air Force in Japan. In February 1926 he was technical adviser to the Greek government. The Lieutenant-Colonel became well-known when on 29 September he flew as the first one from Lands End to John O’Groats (the most southern point in the UK to the most northern point in the UK). The tour was conducted in a De Havilland DH60 with registration G-EBMO (c/n 197). The same year he was elected chairman of the Royal Aeronautical Society.

The Colonel would like to spend his holidays by completing a flight through Scandinavia. The trip would be made in a De Havilland DH80A Puss Moth, G-AAVB (c/n 2003). He took off in his plane at 06.30 hrs on Thursday, 4 September. The flight went from Walsh Harp, Hendon over the Channel to France, Belgium, the Netherlands, Germany and Denmark. But he continued to Sweden and after a 12-hour flight, he landed at Lindarängen, seaplane airport in Stockholm. The distance he covered was 1,040 miles (1,730 km). On the last part of the trip, he had a strong headwind. In the British press, he called for “an apostle of British aircraft”. He planned a return via Norway and the North Sea to Scotland where he would visit his father.

He flew to Tallinn and Helsinki and back to Stockholm. From there he started on Tuesday 16 September towards Gothenburg/Torslanda, where he stayed overnight. On Wednesday, he went on to Oslo. In the purest Indian summer weather he came in flying over Gressholmen and touched down at 18 o’clock near Gressholmen. The small plane looked brilliantly in the air. Aftenposten wrote, “Light and elegant The Master of Sempill maneuvered his plane to the slip – its float are equipped with a steerable rudders, so the driver can control the plane as much as he desires, also on the water” … “The floats were painted white and the wing had a bright aluminum color and it made the Puss Moth very appealing”.

He was met by a delegation: The British ambassador Wingfield, commander of the Naval Air Service, Commander Bruusgaard, commander of the Army Air Service, Lieutenant Colonel Klingenberg, director of the Navy Flyvebåtfabrikk, Captain Johan Høver, Captain Hjalmar Riiser-Larsen, ship owner Halle (general agent of the De Havilland Ltd), Times’ Norway correspondent, S.C. Hammer, and almost as many custom officers as those the meetings.
The Master of Sempill had spent 2 ½ hours on the route Gothenburg – Oslo. It took a little longer, because he had a head wind and because he had to go down to find something in his suitcase.  He would be until Friday (19 September) in Oslo and then continue his flight to Stavanger and Aberdeen.
During the visit, Captain Høver invited him to Horten and the day after they took a short trip there. Here The Master of Sempill was given a tour of the airplane factory, while his Puss Moth was checked up by several naval officers. 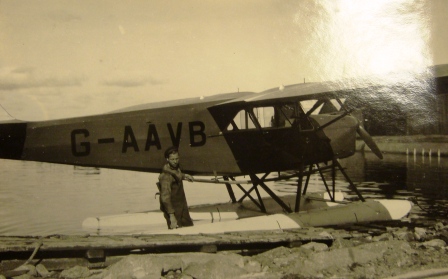 The stay in Norway lasted a little bit longer, but on 21 September, he started the journey back to Scotland. In the pouring rain, The Master of Sempill took off for the first leg to Stavanger. Out on Gressholmen were the ship owner Halle and captain Riiser-Larsen to wave him goodbye. After a perfect start he took a turn over the port with the Norwegian warships and flew down the fjord. It was pretty good weather until Lyngør, where the wind increased. The plane landed at around 18.00 hrs at Lake Hillevågsvannet, south of Stavanger.

Here too, he was received, but not as enthusiastically as in Oslo. After one night, he went back to his plane. Before departure he said that he expected to spend about four hours on the trip across the North Sea.

Monday morning he took off at 10.30 for a nonstop flight to Cruden Bay. It was the same distance as Tryggve Gran flew (but then in the opposite direction) on the 31 July 1914. He arrived there after three hours and 40 minutes and landed fifteen minutes later in Aberdeen, which was the journey’s goal. The purpose of the flight was to show that it was now with the modern machinery was “absolutely safe to flying over the North Sea, both from west to east as vice versa“. After the flight Lieutenant-Colonel Sempill had stated that the route he followed would probably be the future airway between Scandinavia and England. And he was correct. In 1937 Allied Airways (Gander Dower) Ltd opened a direct flight between Newcastle and Stavanger.

Now that The Master of Sempill had left Norway after a short visit, the next visitor from England was announcing his arrival. On 28 September four Supermarine Southampton II-flying boats arrived in the Oslo. But that’s another story. You can read about it in the “Timeline for Civil Aviation“.