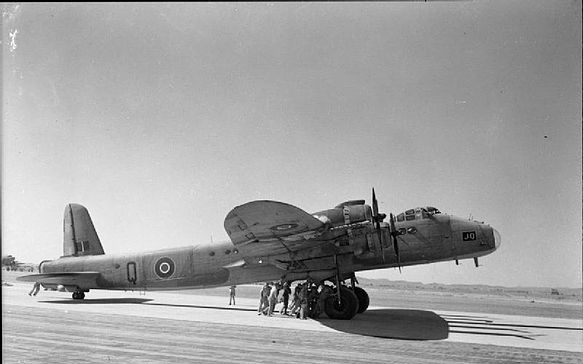 Photograph of a similar aircraft as mentioned in the article: Short Stirling. (via Wikipedia)

Although my website is about civil aviation, I do hope my followers allow me to point out this article: The Netherlands has a rich tradition in salvaging wrecks of Allied bombers and fighters from the Second World War. The below mentioned article came to my attention and touched me. I feel that we also in other countries should try to do our best to keep alive the memory of those who gave the ultimate sacrefice for our freedom.

Possible salvage aircraft wreck with crew
The City Council of the young municipality of Almere will soon decide about the salvage of the aircraft wreck of a Short Stirling with the markings BK710, which crashed in the Lake Markermeer (former Lake IJsselmeer). On board is possibly a crew of six.

The BK710 from the Second World War was shot down during the night from 25 to 26 May 1943 during a mission to Düsseldorf. In 2008, by coincidence, part of the propeller of the Short Stirling was removed from the Lake Markermeer. The plane wreck is considered a war grave. In 2011, a memorial was unveiled on Remembrance Day (May 5) on the island of Marken in memory of the killed crewmembers.

Relatives
The relatives asked the municipality of Almere in the first quarter of 2018 to salvage the remains of the crew members. Following a motion in the House of Representatives, the national program ‘Salvage aircraft wrecks with missing pilots from the Second World War’ was instituted. Six promising salvages for the period 2019-2020 have been established within this program. Minister Ollongren of the Interior has informed the municipality of Almere that the salvage of the Short Stirling BK710 in Almere is one of the six promising salvages. The minister hopes that the municipality of Almere will be positive about this and wants to cooperate with the salvage of the aircraft wreck. The decision to proceed with disposal and the pre-financing thereof must be taken by the municipal council.

Ultimate price
‘In the years 2019 and 2020 we celebrate 75 years of liberation’, the college writes to the council members. ‘Our rights and freedoms are not without obligation, but they require a responsibility for maintaining and strengthening them. For the commemoration and celebration of 75 years liberation and freedom, connection is the key word. The story about the crew members of the Short Stirling BK710 is in line with this. The seven crew members have fought for our freedom and ultimately paid the ultimate price for it. Freedom that we are still grateful for today and offers a solid foundation for our society. ‘The council proposal will be considered in the second quarter.
Article from «Almere-Deze Week»– 27 February 2019

On YouTube is a tribute to the crew: https://youtu.be/DlQBTZm9ykI