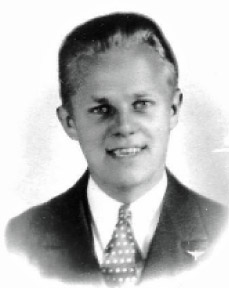 Sometimes you have to go through your papers and clean up and throw away some stuff. This time, I found a nice article by the hand of Hans Olav Løkken about an attempt to cross the North Atlantic, which ended with the death of Clyde Allan Lee and John Bochkon. The reason to mention this attempt is that the John was Norwegian and had a flying certificate issued by Orville Wright. He was born in Trondheim (Norway) on 8 March 1904. Due to sickness, he did not finish school and was thus denied to the Hærens flyveskole (Army Air Corps Flying School). Instead, he became an education as mechanic and was later trained as pilot. On 18 July 1922, he wrote in his dairy that he had made a flight with Christian Hellesen in the “Tiger”. It was his first flight ever. In 1925, he left for the USA and started to work for Glen Curtiss and flew later for the Daily News across the USA in propaganda flights for the newspaper. He also participated in the search for the baby of Charles and Anne Lindbergh.

Bochkon had once written that if he ever returned to Norway, it would be through the air. And since no pilot had ever completed the span across the Atlantic Ocean between the USA and Norway, a Norwegian newspaper posted a $10,000 cash prize to be awarded to the first airplane to complete the cross-ocean flight non-stop. Clyde Allan Lee was up to the challenge.

Lee was very much interested to win that prize and with the aid of mechanic Earl T. Iverson, he got to work on readying his 1928 model red Stinson airplane: “He knew a largeer gas tank was required so he proceeded to build a large, light weight tank and had it welded to the airplane”.He initially sought financial support from Oshkosh B’Gosh and even painted their logo on the fuselage, but the clothing company didn’t show interest. He found new investors from a group Vermont businessmen and had the name of the aircraft changed into “The Green Mountain Boy”. He wanted to take off from Oshkosh, but changed this to Barre on the East Coast. 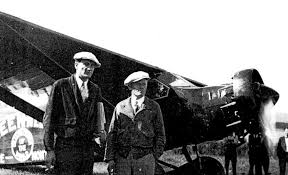 Bochkon and Lee in front of their Stinson.
(via Hans Olav Løkken)

John Bochkon of Brooklyn, New York, also offered to help with expenses, if he could be co-pilot and on 23 August 1932, Lee and Bochkon were bound for Norway. The first leg of the flight was to Harbor Grace, Newfoundland. Bad weather forced the pair to spend the night on a beach in Newfoundland and they arrived in Harbor Grace the next morning. After waiting for the weather to clear, the two pilots finally headed out to sea on 25 August for their nonstop flight to Oslo, Norway. The planned flight was to cover the 3,150 miles across the North Atlantic in 30 hours, estimating their arrival in Oslo-Kjeller at 1800 on 26 August. The men were never seen again, nor the airplane. It is conjectured that a severe storm passed their flight route forcing them off course. Someone in England said they heard an aircraft in the distance, but the authorities were never sure it was them.

The coming days the newspaper reported:
“Morning dawned without relief to the anxiety felt for the missing Atlantic flyers, Clyde Lee and John Bochkon.”
“Authorities held a fading hope the fliers might have been delayed and yet had enough fuel to land in some isolated spot.”
But on 28 August, one could read: “Europe’s Hope For Lee Wanes.”

Nor they nor their aircraft was ever found again.