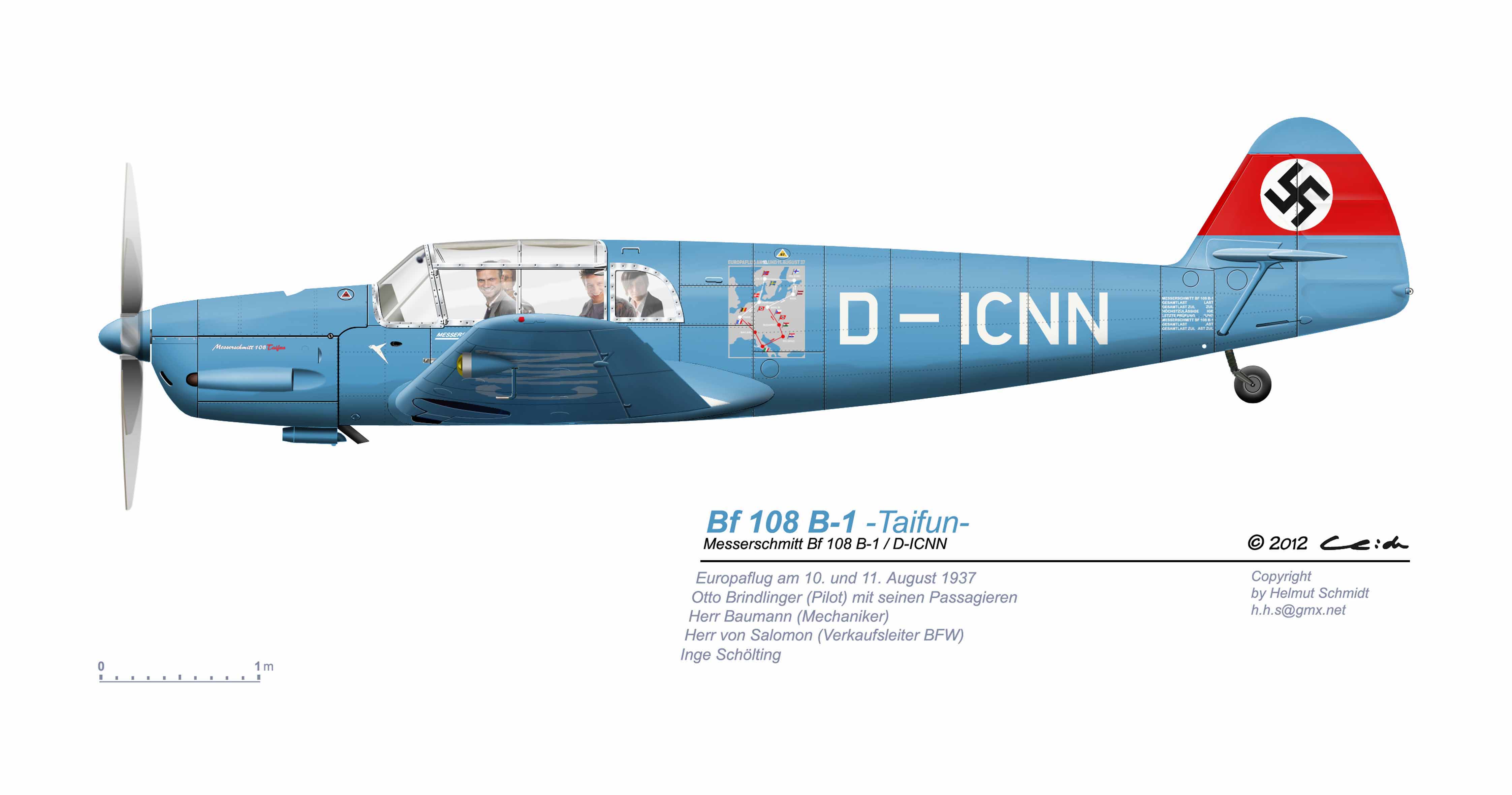 It left as fast as it arrived. On a lovely Summer day, 10 August 1937, at 1230, a small blue plane came down from the sky and landed nicely and fast on Kjeller’s green grass. After filling up 200 liters of fuel, the aircraft disappeared just as fast. It was at Kjeller for exactly 29 minutes. It must have been the shortest visit to Norway?! What kind of flight was this?

It was a Messerschmitt Bf 108 B-1S Taifun – a German one-engine low-wing sports aircraft designed by Willy Messerschmitt. The B-version was equipped with an air-cooled 240hp Argus As 10C engine with two-bladed propeller. The type of aircraft itself was a revolutionary model. It was easy to fly, the pilot had a good view, it was comfortable to sit in and had nice lines. The average speed was 265 km/h, and it had impressive performances for a 240hp engine. The B-version came in the spring of 1935, and this was also the production model with room for four people. Many aircraft participated in competitions and regularly won prizes. The Luftwaffe in Germany bought many aircraft and used it as a communication and light transport aircraft. After building over 500 aircraft in Germany, production during the war was moved to France, where in the next years another 170 aircraft were built. After the war, production continued in France, where the aircraft became known as the Nord 1000 Pinqouin. Post-war production came up in 285 aircraft.

The aircraft that came to Norway had the registration D-ICNN and was a factory aircraft used by Otto Brindlinger. The aircraft was later sold to Carl Heinz Bickhardt. On 10 August, Otto Brindlinger and his mechanic Baumann landed at Kjeller. Together with them was the sales manager of Bayerische Flugzeugwerke GmbH, Von Salomon and a female passenger named Mrs Inge Schölting. The four had started from Berlin (Germany) at 0400, and the plan was to fly towards Riga, and continue via Helsinki to Oslo. But the plane probably did not come to Riga, because it was photographed at Malmen, the military airport at Linköping (Sweden). From Helsinki it had flown in three hours to Oslo-Kjeller. From Oslo, they flew directly to Hamburg and Paris and then flew to Milan, Rome, Belgrade and Warsaw. From there they flew the last stretch to Berlin.

(Article continues under this photograph) 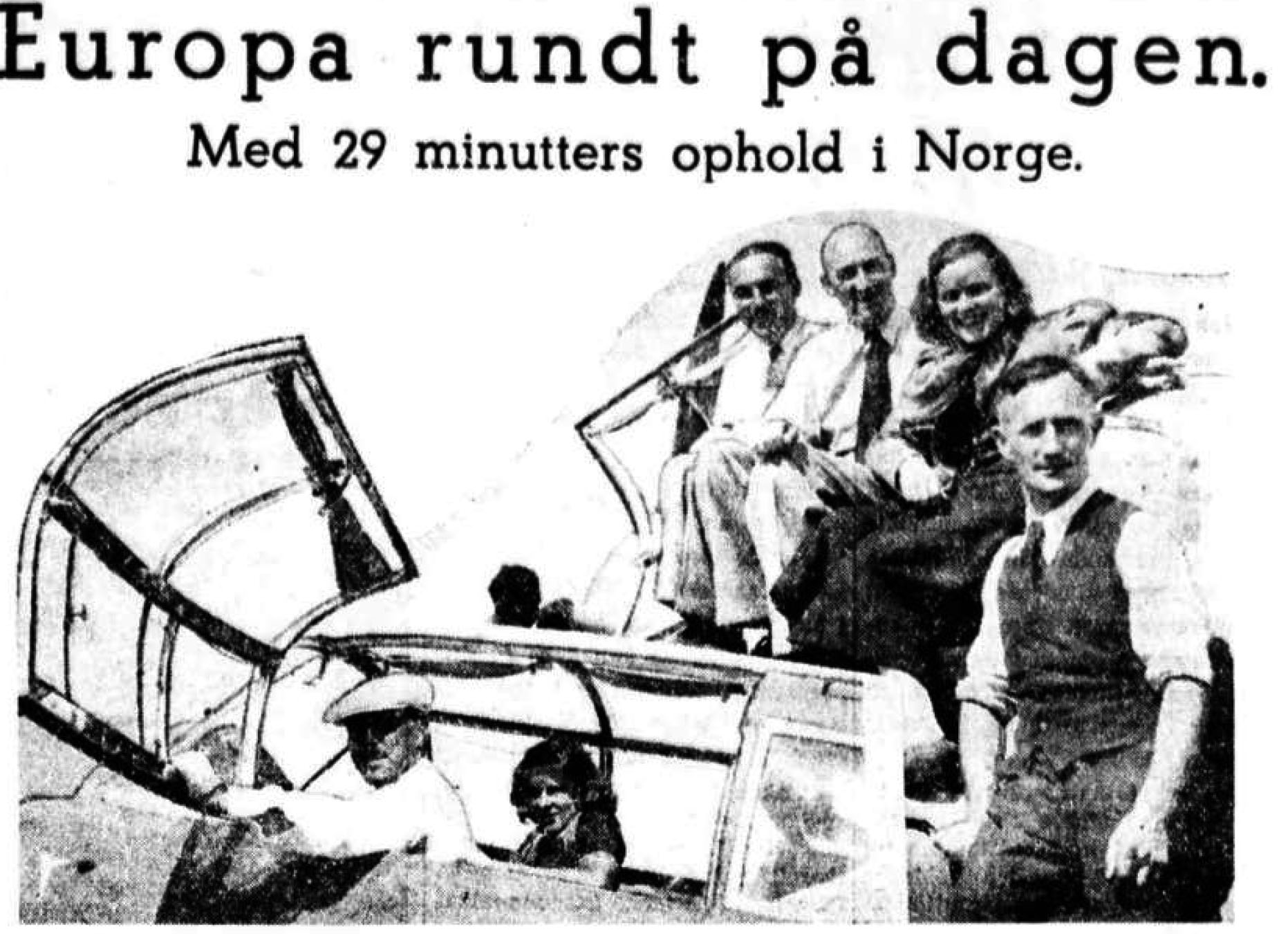 Faximile from Aftenposten, 11 August 1937 about the arrival of the Messerschmitt Bf 108.

The stay at Kjeller and Norway was short, 29 minutes, where of 15 minutes was used to fill up 200 liters of gasoline, while the rest of the time was used for inspection of the engine by the mechanic Baumann, card writing with the aircraft’s tail section as desk, photo shoot with the tanned Flying Officers of the Hærens flyvåpen, who curiously wandered around the gorgeous plane. Kjellers quartermaster Kvaal arranged the customs work, while the passports were checked by the local police officer. A quicker expedition could not be desired.

But then came the command “Einsteigen bitte!” And the roof of the plane was closed, and the engine started up again. The plane started in the middle of the field against a peat bog, where there were a lot of trees. It seemed that the plane would not take off so easily and one feared it would not succeed in raising before they came the bushes at the end of the field. Just after the aircraft took off the wheels were pulled up. With a speed of 300km/h, the pilot greeted people on the ground and disappeared behind the horizon. That first day, they flew 3,300 kilometers and the second day it was just as much.