One of the loveliest provinces of the German Reich and of present Germany is the Province of Bayern (Bavaria). Its size, its landscape and its history have been most interesting and many famous Germans came from the area. In 1912 the province sat up its own air force: the Die Koniglich Bayerischen Fliegertruppen.  But after the Great War civil aviation had to start all over again. One of the highlights in 1919 was the air show arrangement by former military pilots Ritter von Greim and Oberleutnant Ernst Udet. They managed to get two unused Fokker-aircraft (one D.VII and one Fokker Parasol) from storage at Bamberg. These aircraft were to be destroyed by the IAACC. During the autumn of 1919 the two arranged several air shows. Later they managed to get two Rumpler D.Is. The shows attracted thousands and became a huge success. But after the crash of Ritter Von Greim at Tegernsee the show was over and all aircraft were confiscated and subsequently destroyed.

But the Bavarians were still interested in aviation. It was therefore not a surprise that after the Great War Bavarian businessmen saw an opportunity to set up a Bavarian airline company that would connect the city of München with Switzerland. In 1919 the Bayerische Luft Lloyd GmbH was formed. It took over a huge amount of surplus aircraft, among them one Albatros B II, ten Albatros C Is, one Halberstadt C.V, one LVG C.VI, two Friedrichshafen FFs, ten Rumpler C.Is, two Rumpler C.IVs and five DFW C.Vs. Its main aim would be to open an air service from München to Frankfurt am Main, and Berlin, but the main problem was the lack of petrol. It also scheduled to start up an air service from München to Konstanz, beautifully situated on the shores of the Lake Boden. In 1920 a representative of the Bayerische Luft Lloyd GmbH travelled to Innsbruck in Austria to take about the possibilities to open the air service München – Innsbruck. The technical personnel of the company managed during the winter of 1919-20 to convert its two Friedrichshafen FF-aircraft into one huge new civil airliner for seven passengers and crew. The aircraft had seven comfortable seats, small tables, electric light and the passengers sat warm in an enclosed cabin.

But after a cold winter, the IAACC started its hunt on former military aircraft and in March 1920 all aircraft were seized. On the May 6 the Bayerische Luft Lloyd GmbH was informed that it would get back its complete fleet, but just three weeks later (May 25) all aircraft were seized again and this time forever. Only four aircraft were released from the seizure. The IAACC returned on February 18, 1921 an Albatros B II followed by three Rumpler C.Is on March 1. With these four aircraft the Bayerische Luft Lloyd GmbH decided to open its first regular air service.

On April 11, 1921 the Bayerische Luft Lloyd GmbH started to operate the non-stop air service München – Konstanz. Starting point of the route was the airport of Oberschließheim. In the book “Die Koniglich Bayerischen Fliegertruppen 1912-1919“ one of the pilots of the Bayerische Luft Lloyd GmbH, Hans Baur, told about the air service that although only 180 kilometre long he had numerous exciting moments. The airline company had problems in obtaining petrol and headwinds and lost of the road led to dangerous situations, when the petrol tanks were near to empty. At the end of the year the Bayerische Luft Lloyd GmbH the company had transported on its regular air service 283 passengers and 305 kg freight and mail. It aircraft had flown 63,496 km. In addition the company had its sister company in Dresden under the name of Aero Lloyd GmbH dissolved. It is unclear when it had been formed. The purpose was possibly to use it as a body for a concession for the scheduled service between München – Dresden – Berlin.

After the purchase of 50% of the shares in Ad Astra Aero AG, this Swiss airline company opened on June 1, 1922, a service between Fürth, Zürich and Genève (325 km long). In München the Bayerische Luft Lloyd GmbH was able to start up the air service to Konstanz again now using its newly acquired Junkers J 13 Type Fs. In August and September 1922 Ad Astra Aero AG made an extra landing at Konstanz (in co-operation with the Bayerische Luft Lloyd GmbH).

In 1922 the company transported 247 passengers and flew 39,258 km. New passengers were flown until the company opened its München – Konstanz service on June 1. Beside the regular air service the company flew joy ride flights across the Alps and to Oberammergau (Music Festival). 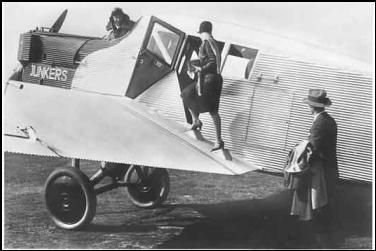 On September 30, 1922 the Jfa on one side and the firm J Adler from München signed three new agreements with regard to the two Junkers J 13 Type Fs: Agreement 1 – The articles of the company were changed in accordance to agreement 3. In case of a liquidation of the Bayerische Luft Lloyd GmbH, the firm J Adler was to be favoured when the aircraft were to be sold.

Agreement 2 – This agreement was between the Jfa and the firm J Adler from München and was about the two Junkers J 13 Type Fs. The agreement regulated the points when the agreement of November 20, 1921 was to be cancelled.

In 1924 Jlag possessed RM 50,000 of the stock-capital of the company, but it was clear that a new airline company was to be formed in Bavaria. This process started on October 31, 1924 in München when the first talks between the representatives from the State of Bavaria, together with representatives from among others Stuttgart, Württemberg, BMW, Dornier, Udet and Aero Lloyd AG took place. The working name of the new Bavarian company was Süddeutsche Luftverkehrs AG, but when in May 1925 the company was formed, its name had been changed into the Bayerische Luftverkehrs AG. This meant that the Bayerische Luft Lloyd GmbH was to be liquidated. This process started in 1925 and was finalized in 1926. At the formation of the Deutsche Luft Hansa AG on January 6, 1926, the new German airline company took over the 50% share of the Jlag in the Bayerische Luft-Lloyd GmbH, which was now only RM 2,000.

* When taken over by Deutsche Luft Hansa AG the aircraft was known as F 13.

The picture (supplied by Lufthansa, Köln) is published for illustrative reason. This was not the actual aircraft used, but only the type of aircraft.