By: Rob Mulder – fleet information via Malcolm Fillmore
For: www.europeanairlines.no

De Havilland Ltd. designer Arthur E. Hagg designed one of the most beautiful aerodynamically airplanes of the pre-war era. But, as with the German Focke-Wulf Fw 200 Condor, the Second World War limited the civil use of the aircraft. On 20 May 1937, the prototype of the D.H.91 Albatross, marked “E.2.”, took to the air with the personnel of the factory witnessing the event. Before the war, the delivered aircraft had a good flying record and were a treat to look at.

Check this link as well: https://youtu.be/6Q_zNrj0GpM 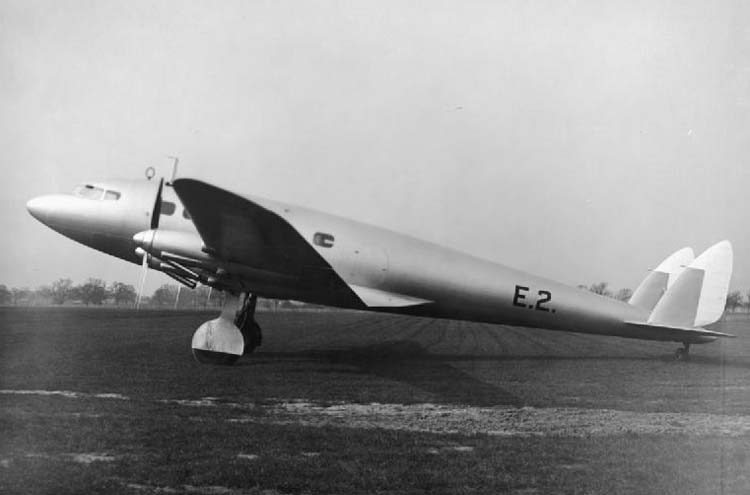 The prototype of the D.H.91 Albatross, marked E.2. This was built as a long-range mail aircraft.

The idea of the D.H.91 Albatross emerged from the October 1934 MacRobertson air race from England to Melbourne, where two standard American-built all-metal low-wing transport monoplanes with retractable undercarriage won second (the Douglas DC-2) and third (Boeing 247D) place. Their speed outperformed the standard British aircraft in service with Imperial Airways by at least 80 miles per hour. It was obvious that new aircraft had to be designed for Imperial Airways. De Havilland had entered the D.H.88 Comet and won the race and the general opinion was that this aircraft should have been a high-speed airliner. The Air Ministry accepted the idea and on 21 January 1936 placed an order for two samples of the D.H.91 Albatross. De Havilland designed a four-engine passenger and mail aircraft according to Air Ministry specification 36/35 for a transatlantic mail plane. Known as the “Albatross Intercontinental Mail” the aircraft specification stipulated that the aircraft must be capable of transporting 1,000 lb of mail a distance of 2,500 miles against a continuous headwind of 40 mph. The long-distance version of the D.H.91 Albatross compelled easily with this stipulation: it could fly 3,300 miles! De Havilland called the passenger version as the “Albatross Transcontinental Passenger Liner” and Imperial Airways wanted it to be the standard airliner for “swift and luxurious world travel by day and night”. Initially, Imperial Airways ordered three and increased the order to five, thus only seven aircraft were ever built. 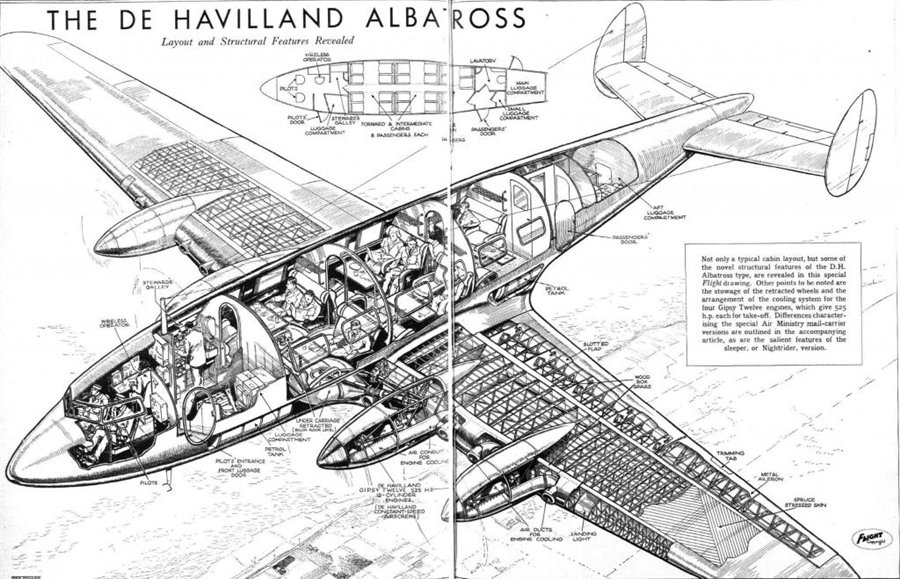 Drawing of the D.H.91 Albatross as published in Flight 1938.

It was a low-wing cantilever monoplane with finely tapered wing, four engines, retractable tailwheel undercarriage, and twin fins and rudders. It had a wooden construction, introduced the ply-balsa-ply sandwich fuselage structure and had a one-piece elliptic wing similar to that of the 1934-racer Comet. The wing had Handley Page slotted type. Initially, the Albatross had strut-bracing inset fins and rudders. The factory changed this into a dihedral tailplane and endplate fins. The engine was a 525 hp de Havilland Gipsy Twelve air-cooled engine and the engine air intakes were in the leading edge. The undercarriage had a single wheel and was electrically retracted into recesses beneath the fuselage forward of the spar. The two long-range aircraft had leading-edge de-icing strips on the wings, tailplane and fins, though the passenger versions did not have this.

The long-range version had its interior filled up with fuel tanks, the centre section having two 330 gallon-tanks.

The flight deck had side-by-side seats and full dual controls and behind the captain was the radio operator’s position. At the front of the main cabin was the navigator’s position and here the parachutes were stored. This was different in the passenger version, where the radio operator sat behind the second pilot with a crew and baggage door opposite on the port side. There was a mail and baggage hold behind the flight deck and on the starboard side was the galley. 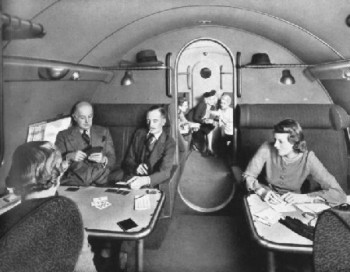 Cabin of the D.H.91 Albatross with people enjoying the flight.

The fuselage was streamlined with a maximum diameter of 9ft 6in and the cabin inside offered seats to 22 passengers in a lofty saloon divided into three compartments. Famous aviation historian John Stroud (who flew the aircraft at the time) seem to recall a drawing showing 23 seats, but he believed the seating was restricted to 21 with only five seats in the aft cabin. The main entrance to the aircraft was at the rear. The cabin was furnished “in various shades of brown, with dark walls, kicking strips, carpets and chairs, medium brown ceilings and lightish brown antimacassars and there was some gold trim. The curtains were striped in mixed shades of brown” (according to John Stroud). The passenger windows were non-splintering and non-inflammable and could in case of emergency be pushed completely out. One article from the 1930-ies mentioned “… they are effectively curtained to exclude tropical sunshine when necessary”. To counteract brilliant sunshine the upper surface of the wing was treated with a special glare-absorbing finish. Between the comfortable chairs large tables could be placed for serving meals. Conditioned air ventilated the cabin and steam heaters corrected the temperature. 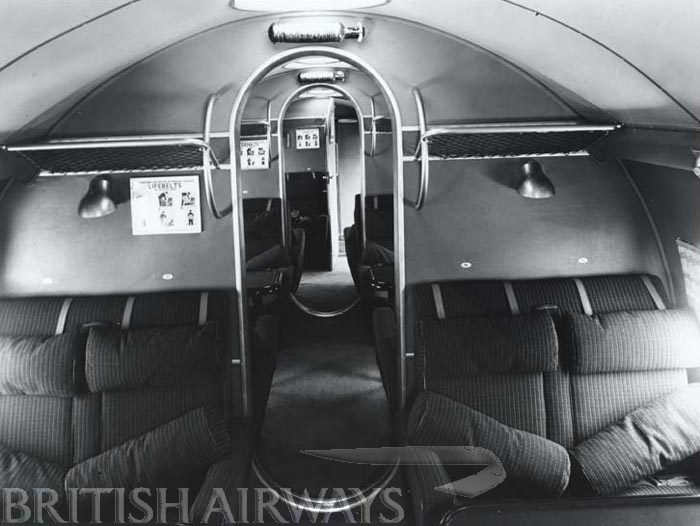 A look through the cabins of the D.H.91 Albatross. (Via British Airways Heritage)

De Havilland also presented in December 1938 “The Albatross Nightrider”, a version with upper and lower berths in the front and center cabins. This version was never built.

The prototype, c/n 6800, was a long-range mail aircraft and was on display during the RAF Display at Hendon on 26 June 1937. It retained its original inset fins and rudders and attractive near-elliptical tailplane and elevators. The second air frame (c/n 6801) was also a long-range mail version and was marked “E.3”. The first two aircraft were later registered as G-AEVV and G-AEWW respectively.

The first passenger Albatross flew for the first time in June 1938 and was then registered as G-AFDI Frobisher (c/n 6802). The passenger aircraft were known as the “Frobisher” or “F”-class in the Imperial Airways’ fleet. The four other aircraft were G-AFDJ Falcon, G-AFDK Fortuna, G-AFDL Fingal and G-AFDM Fiona (c/n 6803 – 6806). On 31 March 1938, G-AFDI Frobisher suffered an undercarriage failure and made a wheels-up landing, but a more serious accident involved G-AEVW (one of the long-range aircraft). It had its fuselage broken in two. The aircraft was undergoing overload tests when the fuselage failed during a landing run. It was rebuilt. 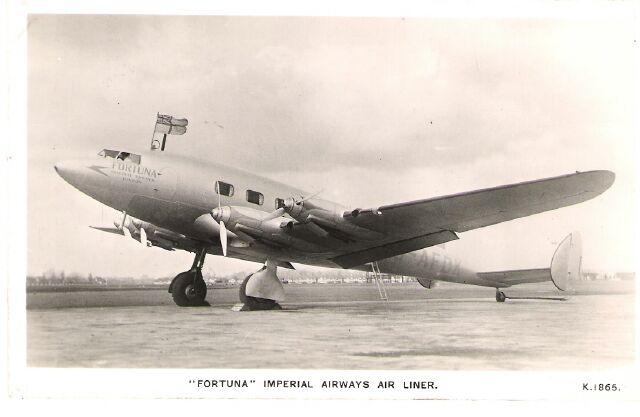 On 17 October 1938, Imperial Airways began acceptance tests of the first aircraft, the G-AFDI Frobisher. With this aircraft, Captain J. T. Percy made a record flight between London/Croydon and Paris/Le Bourget, using just 53 minutes. Later that year, the second aircraft was delivered as well.

The Imperial Airways livery had always been sober marking, usually simply very dark blue-black lettering and sometimes with on a few a fuselage outline. G-AFDI Frobisher, however, had cobalt blue markings with wing and fuselage registrations and company name and aircraft name in this color. For the first time the Speedbird appeared on an aircraft, on the nose also in cobalt. In addition, there were cobalt tapered markings in the engine nacelles. 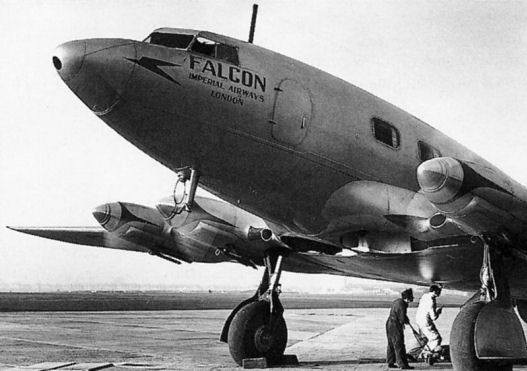 In the same month, the next aircraft, G-AFDK Fortuna was delivered and flew until the end of the month on the London to Basle and Zürich route.

On 1 September 1939, the Second World War started and the Imperial Airways fleet was evacuated to Whitchurch near Bristol. A new era for the aircraft started when the Air Officer Commanding Egypt requested the opening of the service Shoreham – Bordeaux – Marseilles – Tunis – Malta – Sollum – Alexandria. This line was flown for the first time on 22 September 1939 by G-AFDK Fortuna and later extended to Karachi. It was discontinued when Italy entered the War on 10 June 1940.

After the start of the German offensive in the West (10 May 1940), British Overseas Airways Corporation – BOAC (the successor of Imperial Airways) was asked to open a twice-weekly service between London/Heston, Bordeaux and Lisbon with connection to Pan American Airways’ Lisbon to New York flying boat service. The service was started on 4 June and the first flight was performed by G-AFDL Fingal. Bordeaux was dropped when the French capitulated.

In the coming years, new routes were added. In May 1941, BOAC opened Whitchurch to Rineanna (Shannon) in Ireland, where there was a connection to the Foynes – Lagos service flown by Boeing 314s. On 4 July, Dublin was added and connected with Shannon/Foynes as well. But, as from 21 February 1942, BOAC was only flying between Bristol and Shannon again.

The first aircraft that had to be written off was G-AFDL Fingal, which suffered complete engine failure in October 1940 (either 5 or 6). The forced landing near Pucklechurch (Gloucestershire) was successful, but the aircraft landed with its nose in an outside lavatory! 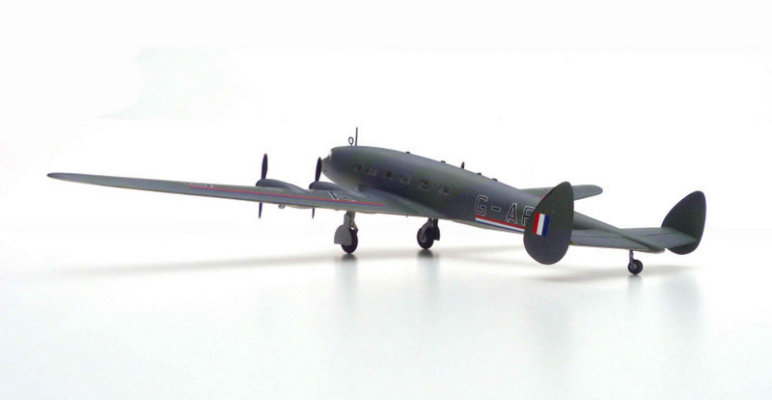 In the meantime, the two initial long-range mail planes were in 1940 converted into passenger airliners and handed over to BOAC as G-AEVV Faraday and G-AEVW Franklin. They remained with BOAC just for a short while and were (in 1941) impressed as AX903 and AX904 respectively. They both went to the No. 271 Squadron (as BJ-V Faraday and BJ-W Franklin) and used to operate passenger and mail flights between the United Kingdom and Iceland. On 11 August 1941, AX903 was heavily damaged during a landing accident at Reykjavik, where it collided with a Fairey Battle. AX904 had a similar fate. It flew on 7 April 1942, from Prestwick to Reykjavik, suffered a break failure during the landing at Reykjavik and the undercarriage collapsed. It was written off. 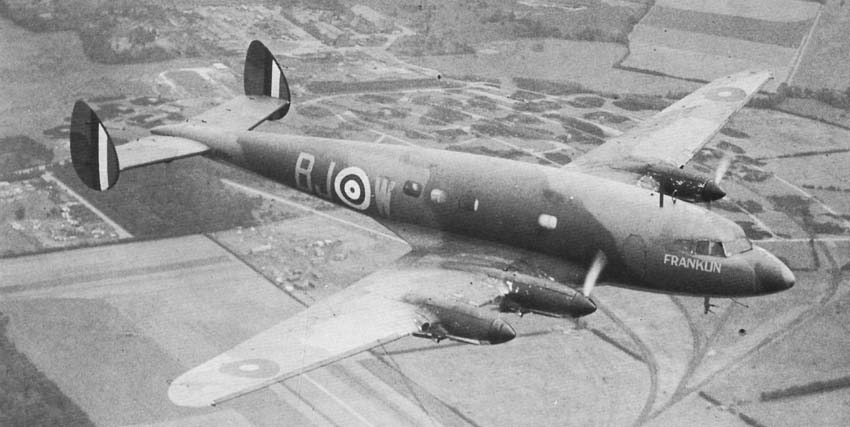 G-AEVV/AX903 had before delivery to the RAF been the subject of a deliberate arson attack! In October 1941, G-AFDI Frobisher was destroyed by fire at Whitchurch, thus by 1942, four of the seven aircraft were out of service.

The wooden structures suffered from standing outside and at the end of 1942, the first to suffer structural failure was G-AFDM Fiona. On 16 July 1943, G-AFDK Fortuna had on the approach of Whitchurch its flaps tore away and the aircraft was damaged beyond repair in the crash landing. The crew and passengers but one were all unharmed, but the aircraft was damaged beyond repair. This resulted in an inspection of the remaining aircraft and it was decided to start an extensive upgrade. But all were withdrawn from use and in September 1943, they were all broken up.

The batch of six DH.91s for Imperial Airways Limited were allocated the regns G-AFDI-AFDM in December 1937 having been ordered in July 1937.